THE BRIDGE TO BELLE ISLAND by Julie Klassen, Reviewed by Rebecca Maney 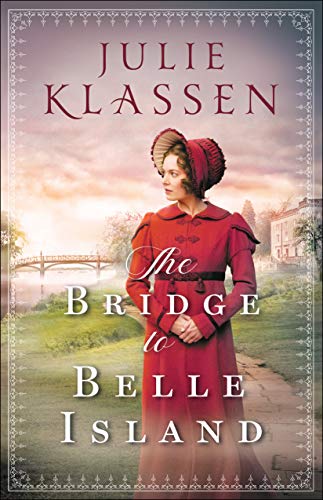 Her mother's last words . . . . forever etched in her brain; compelling Isabelle Wilder to remain tethered to her beautiful home on Belle Island. And now, unfortunate suspicions are swirling about her trustee's untimely death; murder they say . . . . . and somehow she is connected, albeit impossible, because she never traveled to London on that fateful night. However, she does remember having a troubling dream.

Attorney Benjamin Booker has been assigned to investigate the Wilder case; the murder of Percival Norris leads him directly to Belle Island, where a lovelier-than-expected young woman turns out to be his person of interest. The case poses so many unanswered questions and supplies so many people who refuse to answer them that Ben finds it hard to truly suspect anyone, unless he suspects everyone. The longer he remains a guest of the island, the harder it becomes to think that Isabelle Wilder is capable of inflicting harm on anyone, but regrettably Ben has been wrong about attractive women before.

Beautifully written, the author creates a scenario swirling with intrigue and curiosity, before placing all the pieces of the puzzle in exactly the right places; carefully allowing her readers to savor a slow burn romance, while carefully tucking in valuable faith lessons that will undoubtedly outlast the pages of her book.

"State what you suspect as fact with confidence, and nine times out of ten people will believe you in possession of the evidence and respond accordingly." 4.5 stars

BackCover Blurb:
After a humiliating mistake, lawyer Benjamin Booker resolves to never again trust a beautiful woman. When an old friend is killed, the senior partner isn't satisfied with Bow Street's efforts and asks Benjamin to investigate. Eager to leave London for a while, Benjamin agrees. Evidence takes him to a remote island on the Thames, a world unto itself, shrouded in mist and mystery. Soon he finds himself falling for the main suspect--a woman who claims not to have left the island in ten years. But should he trust her?

On Belle Island, Isabelle feels safe and leads a productive life, but fear keeps her trapped there. When Mr. Booker arrives with news of her trustee's murder in London, Isabelle is stunned. She has not left the island, yet she has a recurring dream about the man's death. Or is it a memory? She had been furious with him, but she never intended . . . this.

When a second person dies and evidence shockingly points to her, Isabelle doesn't know who to trust: the attractive lawyer or the admirer and friends who assemble on the island, each with grudges against the victim. Can she even trust her own mind? While they search for the truth, secrets come to light and danger comes calling.