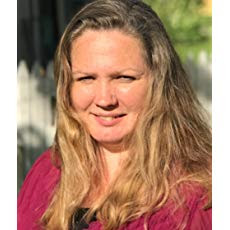 Hi, Debra. I’m delighted to be back at Inkwell. Thank you for having me!

I’m all a’twitter with the re-release of my historical romance Bachelor Buttons. It’s exciting to see a fresh cover on it and apply a few editorial tweaks and give a fun story new life. Since all the St. Patrick’s Day hoopla is over, instead of going on about the Irish side of the story, maybe I’ll just talk about the historical setting a bit. 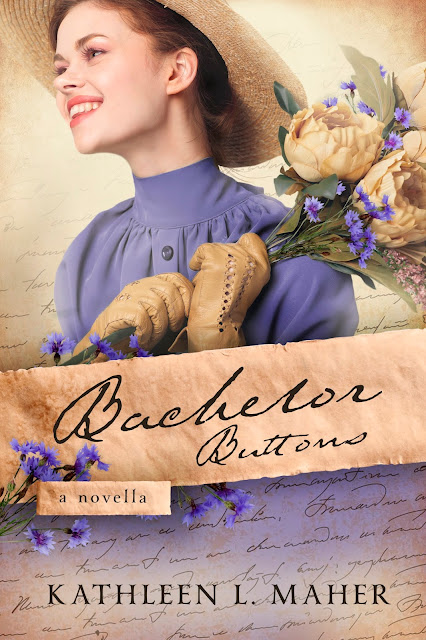 What was New York City like in the 1860’s? We know many Irish emigrated through the city as they fled the Famine. But there were also many German, Jewish, and other European immigrants who settled there to layer over its Dutch foundations. Plus a large population of freedmen, whether escaped from slavery or born into freedom. 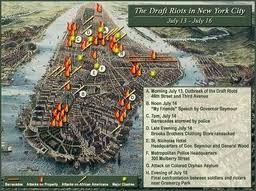 My story is set in Manhattan—an island bordered by The East River, Hudson River and the Atlantic Ocean, which made this the mega trade and port town and global capital of trade and wealth that it is to this day. Those diverse cross currents of commerce, ethnicity, politics, socioeconomic strata, and nationality were now compounded by war.

The Civil War was not a popular war to many, as it entered its third year. Heavy casualties, inept leadership, the financial cost… all made for a smoldering powderkeg among those who started to resent Lincoln and his war. The Emancipation Proclamation had been issued at the beginning of 1863, which some said was a political maneuver to keep England from aiding the Confederacy. To some, it galvanized their cause. But to others, it only added fuel to the fire of resentment. Newly-made citizens, many Irish and other nationalities resented fighting a war to free people who might come and take their jobs from them. 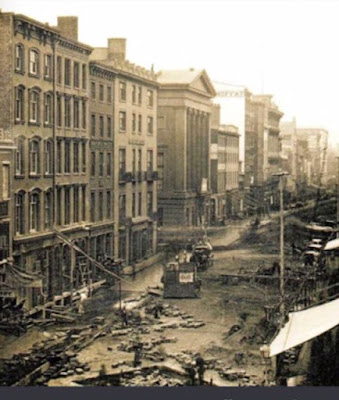 Then the bomb dropped. The Battle of New York City, as some call it, exploded across Manhattan. It started when Lincoln ordered the draft. Democrat papers, critical of Lincoln to begin with, fanned the spark of ire into flame. Mobs of people, many of them Irish, protested the draft offices. The protests turned to riots, and looting, and fires, and lynching. Complete mayhem. Order was restored by troops sent up from Gettysburg, and the local police—many of them Irish, ironically.

Into this setting I have written a suspenseful historical romance novella. Here is the blurb:

The daughter of immigrants who fled the Irish Potato Famine, Rose Meehan longs for a better life than the tenements of New York City. Courted by two men--a young doctor who represents material security, and a poor violin instructor who has captured her heart--she must choose between the two. When Manhattan explodes in mob rule following Lincoln's unpopular draft, Rose’s decision could mean the difference between life and death.

Available on Amazon for only 99 cents: https://www.amazon.com/gp/product/B0851WX4JC/

Thank you so much for having me on your blog, Debra.

CONTEST TIME
I am offering a giveaway to one of your readers of an e-copy of Bachelor Buttons. All they have to do to enter is share this post on social media. The more shares, the more entries. Just tell me in the comments where you shared to claim your entry(ies). And a way for me to reach you if random dot org selects your name. (email is great.)

Also, I am hostessing a huge Rafflecopter giveaway with another Christian historical author. Please take a moment to enter for your chance to win one of these great prizes!

Kathleen L. Maher’s Author bio:
"Where every underdog has his day."
Kathleen L. Maher’s first crush was Peter Rabbit, and she’s loved conflicted heroes ever since. She has two novellas in BARBOUR BOOKS' collections: Victorian Christmas Brides and Lessons on Love. Winner 2012 ACFW Genesis Award. Author of Sons of the Shenandoah Series: The Abolitionist's Daughter and The Chaplain's Daughter.
Kathleen and her husband live in an old farmhouse in upstate NY with their children and a small menagerie.