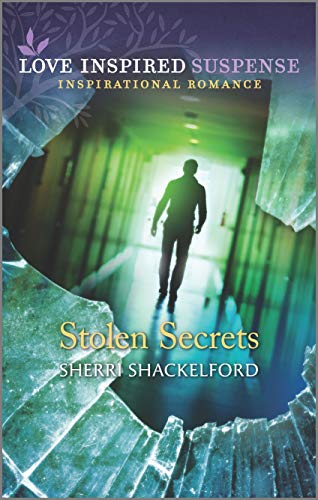 It's with this knife-edge tension that Shackelford introduces a new suspense novel that will keep you on your toes! Someone is impersonating Lucy and framing her for stealing classified technology secrets. It's up to National Security Agent Jordan to keep her safe and bring down the culprit. He feels an obligation to her because of a promise he made to her late fiancé who was killed while they were on a mission. Driven by guilt and loyal friendship, he holds back the feelings he's flooded with when he's around Lucy. It's a race against time to find the impersonator and killer before it's too late!

Sometimes I just wanted to shake Jordan up because he has a real chance at love, but he rejects Lucy's affection all too often! I can understand he doesn't want her to feel like he's replacing her late fiancé Brandt, it's only been a year since he was killed. Lucy is understandably still grieving him, but her faith is what helps her slough through every day. These two work together to bring down the impostor, along with Jordan's team of experts. Never did I suspect who it was! I love when an author can dupe a reader right to the very end of the book.

Knife-edge danger, high-stakes tension, and breath-stealing scenes will have you flipping pages faster and faster, Shackelford packs a punch in 224 of them!
*I received a complimentary copy from the author and was not obligated to leave a favorable review.*

PAULA'S REVIEW:
From Love Inspired Suspense comes a riveting tale by Sherri Shackleford about Lucy Sutton who has a double. This double was seen trying to access her work computer.

Lucy’s fiancé, Brandt, has died in an explosion which injured his friend Jordan Harris, a member of the National Security Agency. Jordan contacts Lucy after he has recovered, months after the incident. This story starts out with action and doesn’t let up. It is intriguing with all the technical jargon of coding and spyware. Who could be impersonating Lucy and why? Can Jordan, with all his experience, help Lucy and keep her safe! Can they both recover from the grief of losing Brandt?

The advice from the Base Chaplain to Jordan about moving past grief and not feeling guilty about a friend dying is very well described. This story is full of hope as well as a good puzzle to work out and a romance that could be.
*I received a complimentary copy of this book from the author. I was not required to give a favorable review. All opinions are my own.*

BackCover Blurb:
From investigating a security breach, to becoming the target of an unseen foe...

Someone has been impersonating software engineer Lucy Sutton to steal classified technology secrets, and it’s up to her to figure out who. National Security Agency employee Jordan Harris is the only person she trusts to help her set a trap. But with an unknown enemy watching Lucy’s every move and threatening her life, capturing the culprit becomes an even deadlier task than they expected.