A RELUCTANT BRIDE by Jody Hedlund, Reviewed by Kim 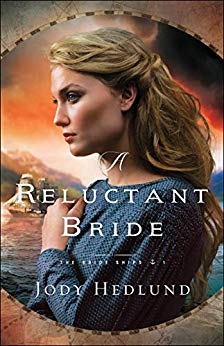 A Reluctant Bride by Jody Hedlund is the first story in The Bride Ships series. I loved this story! It had everything I look for in a historical romance. The storyline was interesting and original, the main characters were wonderfully written, and the romance was perfect! I was so wrapped up in these character’s lives that I did not want this story to end.

I adored both Mercy and Joseph. Mercy is one of the most selfless characters I’ve read, and Joseph comes in at a close second! Even though they came from completely different worlds and had a lot to overcome, they were perfect for each other. I loved that their romance was not seamless, which made it more realistic and how they both grew throughout the story.

My favorite thing about this story is that so much of it was inspired from actual history. I cannot wait for the rest of the stories in this series. With this story, Jody Hedlund is now one of my auto buy authors.

See our reviews of book #2 The Runaway Bride

BackCover Blurb:
Living in London's poorest slum, Mercy Wilkins has little hope of a better life. When she's offered an opportunity to join a bride ship sailing to British Columbia, she agrees. After witnessing so much painful heartache and loss in the slums, the bride ship is her only prospect to escape a bleak future, not only for herself but, she hopes, someday for her sister.