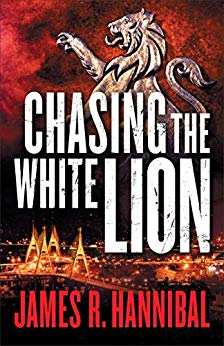 "Think of it this way. The desire to protect you has brought a band of thieves into a church to meet Jesus. God is at work."

Really? . . but of course, CIA case officer Talia Inger is determined to meet one very important deadline with a semblance of normalcy; her baptism, a public profession of her newfound faith. How unfortunate that someone, possibly a fellow agent, is trying to kill her; a hard piece of evidence to ignore, . . . thus Talia's own team of "bodyguards" have reassembled to expose the killer, while keeping her relatively safe. However, this unlikely grouping of "commandos" have a much more difficult task ahead of them than merely attending a church service, they are about to penetrate the lair of one very "white lion", an elusive international figure who prowls atop a "crowdsourced crime syndicate"; always anticipating his next meal.

"Chasing the White Lion" is complicated within its simplicity, of sorts. Even though the missions span the globe, the relationships among characters remain tight and develop nicely within a mass of continual spirals. The technical language is often difficult to imagine, much less understand, but the author manages to pull the reader through to what counts; learning to lean, "this life you've found is not solitary. The children of God have each other, and most of all we have him. "3.5 stars
*I received a copy of this book from Baker Publishing through Interviews and Reviews. The opinions stated are entirely my own.

BackCover Blurb:
Young CIA officer Talia Inger has reconciled with the man who assassinated her father, but that doesn't mean she wants him hovering over her every move and unearthing the painful past she's trying to put behind her. Still, she'll need him--and the help of his star grifter, Valkyrie--if she hopes to infiltrate the Jungle, the first ever crowdsourced crime syndicate, to rescue a group of kidnapped refugee children.

But as Talia and her elite team of thieves con their way into the heart of the Jungle, inching ever closer to syndicate boss the White Lion, she'll run right up against the ragged edge of her family's dark past. In this game of cat and mouse, it's win . . . or die. And in times like that, it's always good to have someone watching your back.

Former tactical deception officer and stealth pilot James Hannibal takes you deep undercover into the criminal underworld where everyone has an angle and no one escapes unscathed.