THE BLUE CLOAK by Shannon McNear, Reviewed by Rebecca and Paula 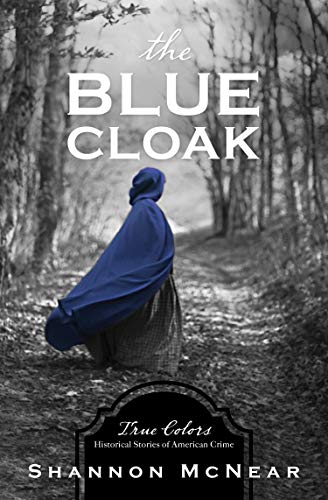 Benjamin Langford covets the prayers of a young way station owner's daughter as he departs on a journey to avenge the murder of his cousin; joining a posse determined to bring the notorious Harpe brothers to trial, he fears the outcome will never be able to erase the regret that he feels over letting Thomas travel on ahead of him. Ironically, the lovely Miss Taylor is not only acquainted with one of Ben's university friends, but she also witnessed the wedding of her best friend to none other than Wiley Harpe; never imagining the darkness now known to be embedded in that man's soul.

As Ben traverses the wilds of Tennessee and Kentucky, his path overlaps that of the notorious criminals over and over again. The trail of destruction they leave in their wake is nauseating in its cruelty, and Ben's promise to Rachel Taylor that he would look after her beloved friend requires more of him than either thought possible. Will it ever end? And will the sweet connection between Ben and Rachel ever have the chance to flourish under such a heavy cloak of sadness and perdition; only time will tell.

Concentrating on the heroic rather than the heinous, the author deftly tells the tale of two historic serial killers, whose sadistic hearts and souls sent them, along with the women they virtually held hostage, on a homicidal rampage that can scarcely be described by mere words on a page. Surrounding the horrible recounts with the light of God's providence, presence, and protection, "The Blue Cloak" serves as a testament to those whose bravery and courage prevailed upon them to search for weeks upon end in order for justice to prevail. It's a story more than worth reading.
3.5stars
*I purchased a copy and was under no obligation to review.

PAULA'S REVIEW:
Kudos to Shannon McNear for tackling a difficult subject of serial killers in 1797 America. This is part of the series True Colors: Historical Stories of American Crime by Barbour Publishing. I give this more than 5 stars!

The research into these events was extensive and thorough. Ms. McNear has done justice to the rein of terror committed by the Harpes along the Wilderness Road in Tennessee. She balances it nicely with the romance of Rachel Taylor, daughter of a Way Station owner and Ben Langford, cousin of one of the victims of the dastardly duo.

This was a very hard subject to read about but Ms. McNear has done a superb job of giving us the facts but tempering them so as to be understandable. She gives her characters a faith to sustain them through troubling times. The story tells us that evil has been around for a long time and sometimes it affects the godly.

In the character of Sally, who is caught in an impossible situation, the author shows us how a woman in an abusive relationship thinks and acts and is virtually caught in a snare.

To think that most of these characters are real people who endured and perpetrated these things is mind boggling. To her credit, Shannon McNear has brought this story to life, the horrific and the everyday life of frontier America.

I appreciate Shannon McNear’s writing more and more with every book of hers that I read. She is a consummate storyteller. She says in the afterward that she bathed this novel in prayer and it shows.
*I received a complimentary copy of this book from Barbour Publishers on behalf of the author. I was not required to give a favorable review. All opinions are my own.*

BackCover Blurb:
Fiction Based on Strange, But True, History

True, riveting stories of American criminal activity are explored through unique stories of historical romantic suspense. Collect them all and be inspired by the hope that always finds its way even in the darkest of times.

Based on real events beginning in 1797 — Rachel Taylor lives a rather mundane existence at the way station her family runs along the Wilderness Road in Tennessee. She attends her friend’s wedding only to watch it dissolve in horror has the groom, Wiley Harpe, and his cousin become murderers on the run, who drag their families along. Declaring a “war on all humanity,” the Harpes won’t be stopped, and Ben Langford is on their trail to see if his own cousin was one of their latest victims. How many will die before peace can return to the frontier?