THE PURPLE NIGHTGOWN by A.D. Lawrence, Reviewed by Rebecca Maney 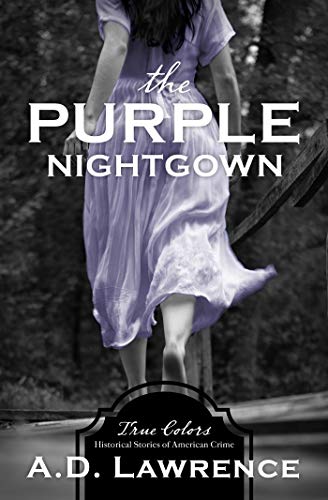 "She couldn't stay in this death trap another night."

Except that Stella Burke was trapped . . . having checked into the Wilderness Heights Health Spa of her own volition and against the advice of her long time friend Henry Clayton. Suffering chronic migraines, Stella sought out the expertise of Dr. Linda Hazzard, having read great things about her methodology for curing various ailments. But once under the doctor's daily regime, Stella is still suffering headaches and has numerous body aches to match. However, her own experiences paled in comparison to the other creepy, malevolent goings-on under the supervision of the famed Dr. Hazzard. If only Henry would come to her rescue . . . or would he? They had parted on very shaky terms.

Thankfully, Stella took hope in God's Word, remembering the words of the psalmist when he wrote, "When I consider the heavens, the work of they fingers, the moon and stars, which thou hast ordained, what is man that thou are mindful of him? and the son of man, that thou visitest him?" She was not alone.

Be prepared to wish that this story was indeed fiction, for the truth of the matter is that Dr. Linda Hazzard was a wolf in sheep's clothing, prowling through the pocketbooks of the rich in order to fuel her own cruel psychosis. Did she get away with it? Apparently she did. Bravo to the author for tackling such a diabolical set of circumstances.
*I purchased a copy and was under no obligation to provide a positive review.
See Paula's Review
BackCover Blurb
Step into True Colors -- a series of Historical Stories of Romance and True American Crime

Marvel at true but forgotten history when patients check into Linda Hazzard’s Washington state spa in 1912 and soon become victim of her twisted greed.

Heiress Stella Burke is plagued by insincere suitors and nonstop headaches. Exhausting all other medical aides for her migraines, Stella reads Fasting for the Cure of Disease by Linda Hazzard and determines to go to the spa the author runs. Stella’s chauffer and long-time friend, Henry Clayton, is reluctant to leave her at the spa. Something doesn’t feel right to him, still Stella submits herself into Linda Hazzard’s care. Stella soon learns the spa has a dark side and Linda a mean streak. But when Stella has had enough, all ways to leave are suddenly blocked. Will Stella become a walking skeleton like many of the other patients or succumb to a worse fate?