THE VEXING by Tamara Leigh, Reviewed by Kim 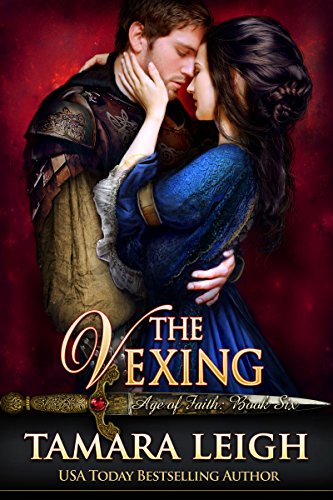 Once I start a Tamara Leigh story, I never want it to end! Her characters are always so wonderful and her storylines are always excellent and never cookie cutter! I don’t usually gravitate towards medievals, but Ms. Leigh’s are absolutely must reads!

While this is a stand-a-lone story, Sir Durand is introduced to us in previous Age of Faith stories. He had a little redeeming that needed to be done and I’m here to tell you, he was redeemed perfectly! He is so honorable, loyal, and kind and I loved his and Beata’s story - every second of it! Beata is such a great character! She’s strong, defends those she loves, and always tries to do the right thing. I loved everything about this couple and this story!

I also really enjoyed catching up with the previous characters in this series. I’m looking forward to reading The Awakening next! Baron Soames is introduced to us in The Vexing and I am intrigued!
*I bought this book, and was under no obligation to provide a positive review. The faith thread is medium.

A VEXING LADY
Answering her father’s summons to return home, Lady Beata Fauvel must evade capture by noblemen who seek to wed a great heiress. But when she falls into the hands of Queen Eleanor of England, she discovers her sovereign has plans of her own for the lady known France over as The Vestal Widow. Now Beata must not only escape the knight entrusted with ensuring she does not wed without permission, but survive a storm-tossed sea and revelation of a long-buried secret that could destroy her family. And what of a heart that wants what it cannot have? Will it only ever beat for the queen’s man?

A REPENTANT KNIGHT
For years, Sir Durand Marshal has faithfully served his queen as penance for betrayal of the Wulfrith family. When he rescues a woman pursued by vassals of the French king, he is charged with delivering to England the nearly scandalous lady who has only a name in common with the one he once loved. Though he never expects to feel anything beyond annoyance for the outspoken Lady Beata, he finds himself drawn to yet another woman denied him. Can he fulfill his duty to his liege? Or will he forsake his redemption and forever ruin his reputation—more, the lady’s?

2017
Available in digital ebook, paperback and audiobook:
Buy The Vexing at Amazon