BOOKSHOP BY THE SEA by Denise Hunter, Reviewed by Rebecca Maney 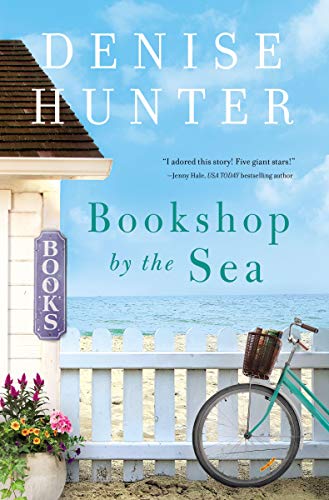 "Forgiveness is one thing. Trust is another."
A lot of water has gone the bridge between Sophie Lawson and Aiden Maddox; seven years worth to be exact. So when Sophie spots her nemesis across the room at her sister's wedding rehearsal party, it's illogical to think that her heart rate might increase and her palms become clammy . . . . she has erased all-things-Aiden from her heart . . . right??? Wrong.

Ironically, things do actually go bump in the night when Sophie and Aiden literally collide in the darkness. Following the ceremony, they both take refuge from an approaching hurricane in the same cottage, owned by mutual friends . . . . what a cruel coincidence or perhaps they have been handed a golden opportunity.

That would be too easy, for Sophie is frantically preparing a grand opening for her long-dreamed-of "bookshop by the sea", located along a quaint boardwalk in Piper's Cove, North Carolina. Meanwhile, Aiden is a successful business man, owning shares in an extreme sports company in Charleston, South Carolina. Laying aside the obvious geographical gulf, they both have abandonment issues that tend to override their ability to trust . . . will lashing out or running away eventually become a barrier to love?

The epitome of a feel-good kind of story, Bookshop by the Sea invites readers to sit back and enjoy the view! Every bookshop needs one, or two, . . . . or a few dozen copies . . . especially after reading that ending!
*I purchased a copy and was under no obligation to provide a positive review.
See Kim's Review

BackCover Blurb
Sophie Lawson should be enjoying her sister’s wedding day. But nothing could have prepared her to see the best man again.

After her mother became bedridden and her father bailed on the family, Sophie found herself serving as a second mother to her twin brother, Seth, and younger sister, Jenna. Sophie supported her siblings through their college years, putting aside her own dream of opening a bookshop in Piper’s Cove—the quaint North Carolina beach town they frequented as children.

Now it’s finally time for Sophie to follow her own pursuits. Seth has a new job, and Jenna is set to marry her college beau in Piper’s Cove. But the destination wedding reunites Sophie with best man Aiden Maddox, her high school sweetheart who left her without a backward glance.

When an advancing hurricane strands Aiden in Piper’s Cove after the wedding, he finds the hotels booked to capacity and has to ask Sophie to put him up until the storm passes. As the two ride out the weather, old feelings rise to the surface. The delay also leaves Sophie with mere days to get her bookshop up and running. Can she trust Aiden to stick around? And will he find the courage to risk his heart?