THE CURATOR'S DAUGHTER by Melanie Dobson, Reviewed by Rebecca Maney 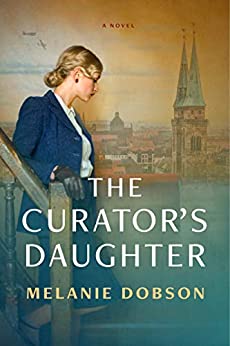 "Whoever owned the definitions, tweaking familiar words for their own use, could influence the morality of a people . . . Twisting their language. Writing fiction instead of fact. Re-creating their past and eliminating the hard truths for their future."

Sometimes you just know. You know when you have stumbled upon a story that will transport you far beyond the limits of mere words on a page, creating space for you to wonder what is priceless, Who is worthy of worship, what must be said, what the cost of silence might be. What is human life worth? Should that kind of value be buried? Forgotten. Ignored. Re-defined. Destroyed. These are questions that every society must answer.

German archeologist Hanna Tillich is a treasure hunter, of sorts. Sifting through through rocks and rubble along the French border, she considers her work for the Third Reich as valuable . . . until she is ordered back to Nuremburg to begin work as a museum curator, following a hasty union with an SS officer, for whom she carries no love or affection. Hanna begins to notice discrepancies, both with the objects that she is carefully cataloguing and with the disappearances of those she holds dear. Valuing the power of "story", Hanna carefully begins to script her own set of records, burying them beneath the stones of an historical prayer labyrinth above her childhood home, often taking her adopted daughter along with her, hoping and praying that one day those very stones might speak the truth.

Decades later, after surviving an horrific childhood, Ember Ellis is nearing the completion of valuable research towards her doctoral thesis, prior to traveling to Nuremberg, Germany. Fascinated with deciphering what created such vitriol towards the Jewish people, and desperate to find a hero or heroine among the German nationals who realized what was happening and decided to take a stand against it, Ember is slightly alarmed when veiled threats begin arriving at her office. Forced into confronting the one person who she swore to forget, she opens up the door to remembering another, who has never been forgotten.

Enjoy this exceptional novel with its indelible characters and eternal spirit of redemptive restoration.
*I purchased a copy and was under no obligation to provide a positive review.
See Nicole's and Winnie's Reviews
BackCover Blurb:
A young girl, kidnapped on the eve of World War II, changes the lives of a German archaeologist forced into the Nazi Party and—decades later—a researcher trying to overcome her own trauma.

1940. Hanna Tillich cherishes her work as an archaeologist for the Third Reich, searching for the Holy Grail and other artifacts to bolster evidence of a master Aryan race. But when she is reassigned to work as a museum curator in Nuremberg, then forced to marry an SS officer and adopt a young girl, Hanna begins to see behind the Nazi facade. A prayer labyrinth becomes a storehouse for Hanna’s secrets, but as she comes to love Lilly as her own daughter, she fears that what she’s hiding—and what she begins to uncover—could put them both in mortal danger.

Eighty years later, Ember Ellis is a Holocaust researcher intent on confronting hatred toward the Jewish people and other minorities. She reconnects with a former teacher on Martha’s Vineyard after she learns that Mrs. Kiehl’s mother once worked with the Nazi Ahnenerbe. And yet, Mrs. Kiehl describes her mother as “a friend to the Jewish people.” Wondering how both could be true, Ember helps Mrs. Kiehl regain her fractured childhood memories of World War II while at the same time confronting the heartache of her own secret past—and the person who wants to silence Ember forever.
Tyndale Publishing, March 2021
Available in digital ebook, paperback, hardcover, and audiobook:
Buy The Curator's Daughter at Amazon
Buy The Curator's Daughter at Christianbook.com
Posted by Debra E. Marvin at May 13, 2021