ALONG A STORIED TRAIL by Ann Gabhart, Reviewed by Paula and Rebecca 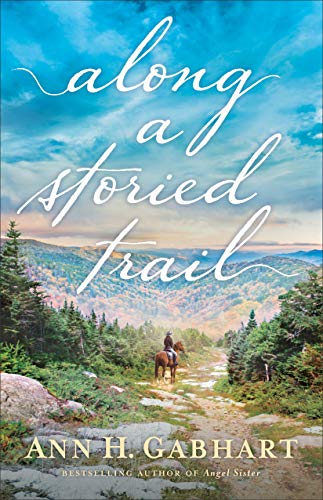 PAULA'S REVIEW:
Ann Gabhart has such a winsome way with words as she captures the dialect of the mountain people of Kentucky.

Tansy Calhoun is a book woman who delivers books by horseback to people in the hills with no access to a library. Caleb is an honorable man trying to do right by his family and following his heart. “Caleb was someone you could depend on to do the right thing. The best thing.” I grew to love Caleb and Tansy in their struggles during the Depression. Tansy was maturing, securing a dream job as a packhorse librarian but finds her dreams may go farther than parceling out books to neighbors in the hills. “A day chin deep in words and stories seemed the next best thing to heaven to Tansy.”

My favorite character was Aunt Perdy. Even though she is prickly, I quickly warmed up to her quirky personality. And she is very wise: “Whilst you might be remembering your wrongs, the Good Lord has done sunk them down deep in the sea where they can’t never float back to the top.”

This was a story of hardship, steeped in faith, forgiveness and a bit of a quandary with excitement thrown in for good measure.

I don’t know how she could top her last book, but each book is uniquely wonderful. Ms. Gabhart cannot write a bad story. She is a natural storyteller. I highly recommend her books.

* I received a complimentary copy of this book from Revell on behalf of the author. I was not required to give a favorable review. All opinions are my own.*I give this 5+ stars and a strong faith thread.

REBECCA'S REVIEW:
"Would that be how Tansy ended up? An old lady in a lonesome cabin . . .Youngsters then might be sharing Aunt Tansy stories. Could they already be talking about that crazy book woman, even though they were glad to see her coming."

That crazy book woman . . . they had the book woman part right, but crazy? Tansy Calhoun loved her job as a packhorse librarian, serving the mountain people of eastern Kentucky, her people . . . even if they did agree with her father that she was "thinking above herself". She was only twenty years old, for goodness sake, and "she had a horse, access to more books than she had time to read, and money to keep food on her mother's table". And she had absolutely not been heartbroken over "Jeremy marrying Jolene. Never was any truth to that rumor along the mountain gossip grapevine". But when Caleb Barton returns from his job in Tennessee where he had been working for the Civilian Conservation Corps? That's when Tansy's "I'm perfectly happy the way things are" begins to shift. It might come down to the outlier or the chestnut trees; not surprisingly, Aunt Perdie has her own opinion about that!

This mountain tale is filled to the brim with colorful characters, delightful banter, and generational wisdom. But don't be fooled, beneath it all run undercurrents of grief, regrets, tough decisions and "confounded contentment" . . . which blend together perfectly into quite a "storied trail".

*I received a copy of this book from the publisher. I also purchased a copy.
BackCover Blurb:
Kentucky packhorse librarian Tansy Calhoun doesn't mind the rough trails and long hours as she serves her Appalachian mountain community during the Great Depression. Yet she longs to find love like the heroines in her books. When a charming writer comes to town, she thinks she might have found it--or is the perfect man actually closer than she thinks?

Perdita Sweet has called these mountains home for so long she's nearly as rocky as the soil around her small cabin. Long ago she thought she could love, but when the object of her affection up and married someone else, she stopped giving too much of herself away to others.