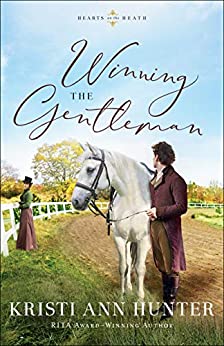 "Mr. Whitworth had said she was trouble . . .  She'd thought it was more the type of trouble that made someone uncomfortable or doubled their workload for a day. Instead, she was the sort of trouble that crushed a man's life . . ."

And Sophia Fitzroy certainly did not want to ruin Aaron Whitworth's livelihood, for he had thrown Sophia and her twin brother a lifeline, albeit under dubious circumstances; nonetheless, her new employer had provided them with an opportunity to leave one life behind and literally race towards another. Why did making a right decision, suddenly feel wrong, unless . . . had she missed God's voice? Were her dreams, just that . . . dreams? A woman jockey, horse trainer, instructor? And at the tip top of her concerns; how to handle the sizzle of attraction towards the moody, broody Aaron Whitworth.

Aaron Whitworth had fought off feelings of inferiority his entire life. Being the illegitimate son of an earl placed him squarely in the crosshairs of English society. He had the monetary advantages of the gentry, comparatively speaking, but with it came the scorn and disownment that one would expect. Except for horses; he had always loved working with horses, building a solid reputation among his few titled friends in order to manage two reputable stables. And then . . . .along came Sophia, who could ride like the wind, and whisper endearments to the most powerful of creatures. And fool that he was . . . he had hired her to race.

"What if, instead of trying to imitate what he'd been taught a gentleman should be, Aaron started living by God's standards for one?"

When you turn every page with eager anticipation for discovery, it's a guarantee that you have landed between the covers of an extraordinary book. And "Winning the Gentleman" is just that . . . extraordinary! So romantic, so inspiring, so well balanced between pause and pursue. May every reader rest in the the truth that God's intentions for their future are the only ones that truly matter.

*I received a copy of this book from the author and publisher. The opinions stated above are entirely my own. 4.5 stars

BackCover Blurb:
Aaron Whitworth hasn't had control over most aspects of his life, but he's always taken pride in being an honorable businessman and better-than-average horseman. When both of those claims are threatened, he makes the desperate decision to hire the horse trainer of a traveling circus as a temporary jockey for his racehorses.

Sophia Fitzroy knows that most horsemen don't take her seriously because she's a woman, but she can't pass up the opportunity to get away from the tumultuous world of travel and performing. As she fights for the right to do the work she was hired for, she learns the fight for Aaron's guarded heart might be an even more worthwhile challenge.

As secrets come to light and past vulnerabilities are confronted, will Aaron and Sophia sacrifice their former dreams and forge a new one together--against all odds?