IS IT ANY WONDER by Courtney Walsh, Reviewed by Rebecca Maney 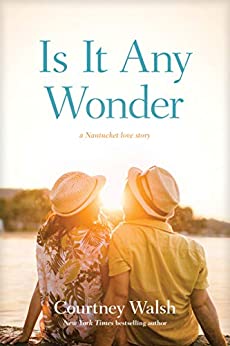 An excerpt from one of the many letters that Louisa Chambers never sent to the people she loved . . . this one was particularly painful, for its recipient was no longer a resident on this earth. He had been a drowning victim, fighting to save the life of his son, a young man whom Louisa had loved with all of her heart, until the night that everything shattered between them.

"Not today ocean. If you want her, you're gonna have to go through me." Diving directly into the cresting waves, Cody Boggs uses all of his Coast Training to rescue the young woman who had ignored the most important rules of paddle boarding off the Nantucket Sound; watch the weather, wear a life jacket. Pulling her near lifeless body onto the rescue boat, and giving her some much needed oxygen, "intense blue eyes" locked onto his face with recognition. "Cody?" It couldn't be. Not her. "Louisa?"

It's nearly impossible to describe the kind of high voltage intensity that permeates this entire story from beginning to end in just a few words, or even in several well formed sentences. The depth is equally nauseating and thrilling, the romance; simply electrifying with its stutter-steps and misunderstandings, all the while remaining securely tethered by the constancy of its heartbeat, and the spiritual applications? Numerous, poignant, invigorating . . . . and utterly convicting.

Summing up the core is a statement by Maggie, one who loved Cody and Louisa with an unconditional love that appeared everlasting, when she said, "As many times as you wish you could change that night, that's as many times as your father would do the exact same thing for you. . . . . It's like Jesus. . . . he knew his sacrifice meant the rest of us could live."

Will Cody and Louisa find their way back to the lighthouse in time? They made a pact, do they have the courage to keep it?

*4.5 stars. I purchased a copy and was under no obligation to provide a review.

BackCover Blurb:
Can a promise made as kids bring them back together as adults? In this Nantucket-set beach read, “master of the genre” (Midwest Book Review) Courtney Walsh delivers a sparkling inspirational romance about first love and second chances.

Twelve years ago, Cody Boggs and Louisa Chambers made a pact that no matter where their lives took them, they’d return to Nantucket Island’s Brant Point Lighthouse on July 30, their shared golden birthday, and continue their tradition of exchanging birthday wishes. But that was before a tragic accident upended both of their lives, irrevocably pulling them apart.

Their worlds collide just months before that particular day when Louisa’s fledgling event planning company is hired by the local Coast Guard station, where she discovers Cody has recently returned to the island as the second in command. As they plan a regatta fundraiser, hoping to promote positive PR in the community, neither can deny the fireworks each encounter ignites. But working together also brings up memories of the day Cody’s father died, revealing secrets that have Cody and Louisa questioning everything they thought they knew and felt about their families and each other.