HER EVERY MOVE by Kelly Irvin, Reviewed by Rebecca Maney 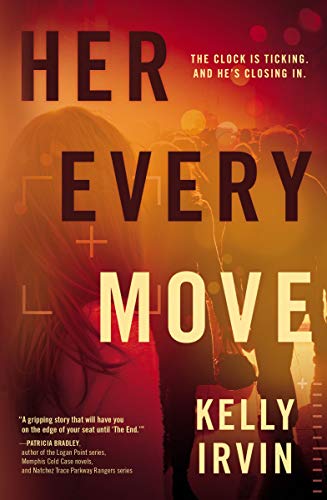 People are dying in San Antonio, Texas. Librarian and event coordinator Jackie Santoro has landed directly in the epicenter. One of her very best friends, one of her mother's very best friends, an experienced caterer, city officials, the police chief, . . . and the list of victims from multiple bombs continues to grow; for some reason law enforcement is determined to link Jackie's family to these heinous crimes. Or at least, it seems that way. One very curious and determined detective seems to be around her every corner, Detective Avery Wick.

Detective Wick likes to fit random pieces of crime puzzles together, and nothing about the San Antonio serial bomber fits. The perpetrator claims to be part of an organization that doesn't exist and he/she seems to continually be ahead of any attempts to prevent the next catastrophe. Jackie Santoro's family has plenty of reason to hate city bureaucrats, but Avery's gut instinct tells him that she is innocent . . . . the beautiful city librarian is giving off multiple vibes, from anger all the way to something else, and it's that "something else" that could be equally dangerous . . to his heart.

A little jagged around the edges, this story gives off mixed signals when it comes to how the characters actually feel about their faith and about each other. While the language on the page is clean, Avery obviously has no self control over his expletives. Thankfully, balance is the key to every good book, and while the characterizations might have been marginally off-putting, the story itself is fascinating. I never did figure it out, and the last chapter was one of the best.

*I purchased a copy and was under no obligation to provide a review.

BackCover Blurb:
He’s a cop trying to stop a serial bomber. And she’ll stop at nothing to clear her own name.

When a deadly bomb goes off during a climate change debate, librarian and event coordinator Jackie Santoro becomes the prime suspect. Her motive, according to Detective Avery Wick: to avenge the suicide of her prominent father, who was accused of crimes by a city councilman attending the event.

Though Avery has doubts about Jackie’s guilt, he can’t exonerate her even after an extremist group takes responsibility for the bombing and continues to attack San Antonio’s treasured public spaces.

As Jackie tries to hold her shattered family together, she has no choice but to proceed with plans for the Caterina Ball, the library system’s biggest annual fundraiser. But she also fears the event provides the perfect opportunity for the bomber to strike again.

Despite their mistrust, Jackie and Avery join forces to unmask the truth—before the death toll mounts even higher.