Annie Oakley - What a woman!

I've been enamored with the American Old West since my early teens. My first stories were about pioneers and Conestoga wagons, cowboys and Indians. Back in the late 70’s my CB handle was ‘Annie Oakley’. She was my hero. As a member of the Canadian Armed Forces and unused to guns, my arms would waver while I forced myself to hold the 7 lb FNC1 rifle on target out on the weapons range. My arm strength was non-existent.

And yet Annie Oakley who stood a diminutive 5 feet tall and only weighed 110 lbs could easily hold a 7 lb rifle, shooting forwards and backwards, over 2 performances daily with a degree of accuracy which turned experienced marksmen into lifelong fans. 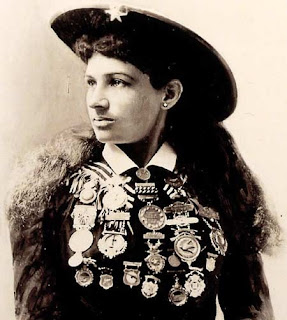 Born Phoebe Ann Mosey on August 13, 1860 in Darke Country Ohio, Annie taught herself how to shoot out of necessity, with her late father’s old 40-inch cap and ball Kentucky rifle when she was only 8 yrs old. Soon after, she was sent to work at the county poor farm where she received her education and learned how to sew. She lived there for several years. However, according to her autobiography (1), around the age of 10, she was ‘lent out’ to work with a local farm family who abused her both physically and mentally until she ran back to the county home. At 13, Anne went back to her poor family and took up hunting to feed them. Due to her skill with the rifle and business sense, she sold excess game to local hotels and restaurants. By the age of 15, Annie gave her mother the $200 to pay off the farm mortgage. 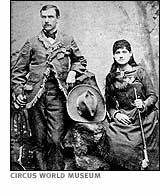 A hotel owner in Cincinnati who served Annie’s game in his restaurant invited Annie to a challenge against marksman Frank Butler. Word is, Frank laughed when he saw his competition. But he soon became amazed at her skill when she made 25 perfect shots to his 24. Some accounts say he fell in love with Annie on the spot. Others say she amazed him. And that he was enthralled by her. We know they courted over the next year and then in 1876 at the age of 16, Annie became Mrs. Frank Butler. I get a warm fuzzy feeling just thinking about their love story.

Annie Oakley is a paradox: 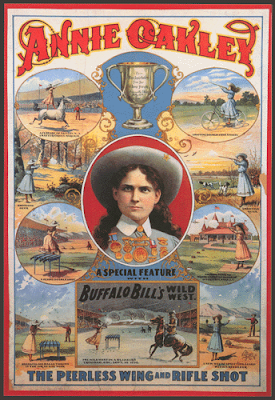 - Annie was born in an age where women worked at home and yet even after marrying Frank, she was the money earner and he stayed in the background as her business manager.

- Annie was only 5 ft tall and yet she shot straighter than most big men.

- Annie shot a 7 lb rifle – clearly a masculine object – while parading around in shorter than normal skirts. She also left her hair long and unpinned much like a little girl.

- Annie once shot the ashes off the kaiser’s cigar and yet she’d pout and give a little tantrum kick when she purposely missed.

- Annie sewed her own clothes, always wore skirts and leggings and never showed a bit of skin and yet her clothes were form-fitting and showed off her womanly figure.

- Annie would sit in her tent with her embroidery hoop between shows and yet she was surrounded by her guns and powder bins.

- Annie encouraged women to get out there, learn how to shoot and become

self-reliant and yet at the end of the day she went home to Frank.

- Annie was a proper Victorian lady and always dressed in skirts and yet she made her mark as an athlete in a man’s world.

- Annie was reserved and demure and yet projected a bold vitality which showed she was in control.

- Annie argued for women’s equality insofar as equal pay for equal work and yet she explicitly argued against women’s suffrage.

- Annie was always perfectly turned out and yet she’s reported as saying ‘I went all to pieces under the care of a home’ and Frank once said she was ‘a rotten housekeeper’. 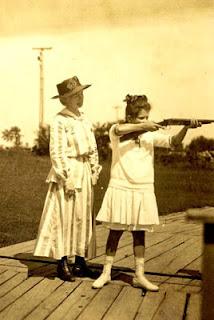 Annie and Frank performed before European royalty while travelling with the Wild West show. Annie commanded $700 a week in earnings while on tour in Europe and yet she lived a frugal life remembering the poverty of her childhood. She sent money home to her mother and family, and gave money to orphans, widows and young women who wanted to further their education. Records show she provided funding and professional training for at least 20 young women

Over the years, Annie taught over 2,000 women and girls in firearm safety and shooting.
When the U.S. joined WWI in 1917, Annie offered to raise a regiment of women volunteers to fight in the war – much as she had during the Spanish-American war. She also offered to teach marksmanship to the troops. She was ignored on all counts. And yet she freely gave her own time to hold shooting demonstrations to raise money for the YMCA, the National War Council, War Camp Community Service and the Red Cross.

Annie performed until she was 62 yrs old and that was after a debilitating train crash put her in the hospital for a year, and a car crash gave a permanent a brace. After a 50 yr marriage, Annie died on Nov 3, 1926 followed by Frank 18 days later. Both died of natural causes. 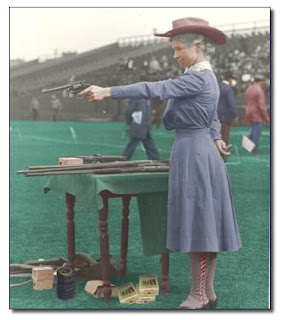 Annie Oakley was a role model for today’s young people. She proved women can be feminine and athletic. She showed that women can do a job in a man’s world without appearing threatening. And that a woman could be paid the same as a man if she practiced and became good at her job. Her life was an example to other women who wondered if it was possible to have a fulfilling life out of the home and still remain happily married. And most of all, Annie showed that women can show strength, be self-reliant and protect themselves if need be but still be pure and sweet while holding the gun.


So, what I'd like to know is:
- Did you ever role play as a youngster like I did with our 'Cowboys and Indians' and our Roy Rogers and Annie Oakley guns?
- If not, what games did you play?