What words come to mind when you hear the name Nellie Bly? Adventurer? Reporter? Women’s Rights Activist? They would all be correct, but how did a woman born in 1864 come by the courage and spirit to delve into places no men dared to go?

Life wasn’t easy for little Elizabeth Cochrane. Born to a well-respected judge and his wife, and almost immediately nicknamed Pink, Elizabeth’s life should have been one of comfort and bliss. But her father died when she was six-years-old. Since he didn’t leave a will, and it was 1864, her mother had no rights to his property. Wanting to provide the best home she could for her children, she remarried and Pink’s life changed dramatically. Instead of a loving daddy, Pink ended up with an abusive step-father.

Imagine if you will, a lonely little girl who watched her mother go from a life of happiness to one where she and her children endured years of abuse. At age fourteen, Pink had to testify about the abuse at her mother’s divorce trial. After that, they moved to Pittsburgh where her mother took in boarders in order to feed her children.

It was during this time that Pink took notice of the young girls who worked in the factories and canneries under the most atrocious of conditions. Pink was at a loss to understand why they couldn’t get jobs similar to their male counterparts. When she was eighteen, she read a newspaper column that basically said women were useless outside of marriage. Fueled by years of abuse followed by years of watching her mother slave away and seeing how young women in Pittsburgh were treated in their workplace, Pink fired off a letter to the editor in response to the article and signed it Lonely Orphan Girl.

She made an impression.

Pink’s letter wasn’t published, but she was invited to meet with the editor and he hired her to write for the paper. Her first articles were about the lack of women in the business world, bad marriages, and divorce—everything she’d experienced as a young girl. Lonely Orphan Girl dared to question whether a bad marriage was better than no marriage at all.

When her editor decided she needed a proper byline, he chose the name of a popular song by Stephen Foster: Nelly Bly. But because of a printing error on her first byline, Nelly became Nellie.

She made a difference.

Nellie wasn’t interested in society balls and who wore the latest fashions. She wanted to cover politics and crime just like the male reporters. She wanted to make people aware of cruel treatment of women and children in the factories. The only way she could do this was to go undercover as a factory worker. It wasn’t long before she was able to bring their issues to light. 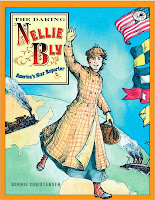 Eventually Nellie convinced her editor to send her to Mexico as a foreign correspondent. She reported about poverty and violence, and the homelessness of some of the people. Because of her outspokenness, it wasn’t long before Nellie began receiving threats and eventually had to leave Mexico.

Her next stop was New York City. With her reputation as an undercover reporter and foreign correspondent, surely she’d have no trouble getting a job in the big city. Right? Wrong. In New York, she was a nobody. It took four long months before she convinced Joseph Pulitzer to hire her. But it was well worth the wait because it led to one of her most famous exposés.

Illustrious Nellie managed to get herself committed to an insane asylum known as Blackwell’s Island. She checked herself into a boarding house under the name Nellie Brown, and soon began drawing negative attention to herself by acting crazy. When she emerged ten days later, her series of articles created a sensation. No other reporter had ever dared such a thing.

That she was brave is without question. But her purpose was noble. She wrote, “I answered the summons with pleasure because I longed to help those of God’s most unfortunate children whom I had left prisoners behind me.”

She continued working undercover to expose corruption and help women in precarious situations. And of course, she had her adventures. She once jumped off a ferry to see if the rescue crew knew how to do their job. She rode in a hot air balloon, and danced in a chorus line. But her biggest adventure had to be when she traveled around the world to see if she could beat the record set by Phileas Fogg in Jules Verne’s novel: Around the World in Eighty Days. She did it in seventy-two days.

But that was Nellie, always determined.

Many people associate her with a dare-devil spirit. An adventuress. They overlook the part of her that longed to make the world a better place for the less fortunate. Even after her biggest adventure, she continued looking out for others with her writing and in 1914, she became the first woman war correspondent.

Without a doubt her unhappy childhood influenced her desire to make things better for others. I think it was that childhood, and the things she saw as a young woman that gave her the courage to delve into the world of undercover reporting, in spite of being told it couldn't be done.

I hope you enjoyed reading about Nellie. I’ve always been fascinated by her and the life she led, more so after reading her own words. In fact, in one of my historical novels, my heroine longs to be a reporter and make a difference like Nellie Bly. And like my heroine, Nellie's story inspires me to dig a little deeper, to try a little harder, and to pray even more: Dear Heavenly Father, help me be aware of those around me. Help me try to make a difference in someone's life today.

Serious questions of the day: Which do you think made Nellie more successful in the field of journalism: her spirit of adventure, or a desire to make life better for the less fortunate? Do you think they were equally fulfilling?

Fun questions of the day: Do you have a spirit of adventure? What is the most adventurous thing you've ever done?

Note: My bibliography sources are all pictured above by bookcover. These books (and the Stephen Foster Songbook) can all be purchased through amazon, barnes and noble, or overstock. However, the two books by Nellie Bly herself can also be read for free by clicking these links:
Ten Days in A Madhouse by Nellie Bly
Around the World in Seventy-Two Days by Nellie Bly
Posted by Suzie Johnson at November 13, 2009