Florence Nightingale: The Lady with the Lamp

When the ladies of Inkwell Inspirations first banded together, we all chose an alter female ego: a woman from history who embodied traits we admired or learned from. I, Jennifer AlLee, have a confession to make… I was stumped.

It’s not that I’ve never been inspired. But it was difficult to come up with a woman I knew enough about to say, “Yes, she’s the one.” So I had to do a bit of thinking. And a bit of research. And finally, I found a woman who exemplified traits I aspire to: Florence Nightingale.

She followed God’s call – Florence was born into a privileged English home in May 1820. At the age of twenty-five, she scandalized her family by announcing her decision to go into nursing. The reaction may seem shocking. After all, what parents wouldn’t be proud to have a nurse for a daughter? But at that time in history, nursing was not a noble profession. Most nurses were hanger-ons, following the armies around, and often doing double duty as cooks. But Florence truly believed that she had a divine calling to tend to the injured. She ignored the expectations of the day, turned her back and status and privilege, and listened to the call of God on her heart. 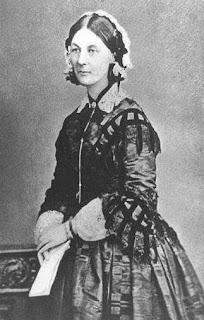 She studied her craft and shared it with others – Florence didn’t just run into the fray unprepared. She studied hard to educate herself in the art and science of nursing. Then, after years of experience and practice, she founded a school of nursing, passing on her knowledge to future generations.
She was known as The Lady with the Lamp – This is probably my favorite bit. It’s so symbolic, I don’t even have to say anything for you to know where I’m going… but I will anyway. During the Crimean War, she became known as “a ministering angel” who would check on the fallen soldiers long after other medical staff had gone, always holding her lantern aloft. She was a symbol of hope to the injured. When they saw her, they knew that at the very least, someone cared enough about them to be there. To look them in the eye and make a human connection.

I hope that in my life, I’m able to bring such hope to people. To share not only my love, but the love of Christ. To let people know that even in the darkest times, they’re not alone.

She’s been a Jeopardy question – Ah, my most shallow desire! How fun would it be to have your name be called out on Jeopardy? In fact, my family has already started practicing. Whenever there’s a category that has anything to do with literature, we all shout out “Who is Jennifer AlLee!” A girl can dream, right?

Questions of the day:
1. Who inspires you to strive for greater things?
2. If you could be a contestant on any game show, what would it be?
Posted by Jennifer AlLee at November 02, 2009