1200 BC was not a good time for Israel, a couple generations after Joshua when the people had ‘forgotten’ their faith. Sometimes I wonder how they can have such spiritual victories and then get mediocre in their faith. Then I think. Oh. Right. Judges 2 says “Every man did that which was right in his own eyes.” Ooops 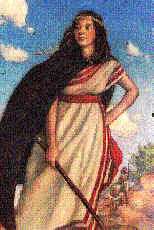 Deborah was married and had this really unusual job “outside the home”. She would sit under her big palm tree and listen to people’s concerns or disagreements and then make a judgment. Both men and women came to her, proving her intelligence, respectability and presence. When she spoke, people listened.

I imagine Deborah spent a lot of time in prayer before she went out to hold court.

Deborah’s other job, prophetess, is even more inspiring. Before the Holy Spirit came as comforter and counselor, God used prophets to speak to His people as a nation. That’s a big responsibility. “The Lord God says . . .”

During Deborah’s time, the Hebrews are oppressed by the Canaanites. God lets them suffer their own consequences, but just like any parent, He acts with compassion, and speaks to Deborah. She calls on Barak, a young Jewish warrior: “The Lord commands you to raise up ten thousand men. I (God) will lure Sisera (leader of the massive Canaanite army) to the Kishon River and give him into your hands.” God had a plan and He has the ability, right?

Barak turns to Deborah. “If you go with me, I will go; but if you don’t go with me, I won’t go.” After all, Deborah was wise, favored by God, a woman of strength and conviction. A good decision? Actually, Barak misses his chance here to be the new Joshua. I’m not sure I blame him. You want me to do what?! He needed to step out in faith and go anyway, believing God would do as He said.

“Very well," she says. "I will go with you. But because of the way you are going about this, the honor will not be yours. The Lord will hand Sisera over to a woman.”
Deborah and Barak head out, leading their army. When Sisera hears this, he laughs and gathers his army, including 900 iron chariots, to meet them. 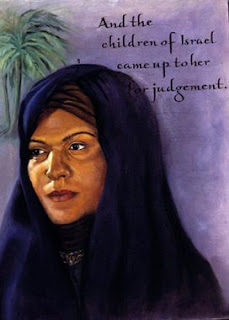 I wonder if Deborah slept well that night or if she spent the night in prayer. I like to think she prayed with all conviction that God was in control and then settled down for a restful sleep.

The day came. The enemy is before them. “Go!” she tells Barak, “This is the day the Lord has given Sisera into your hands. Has not the Lord gone ahead of you?” Barak’s army destroys the Canaanites. All the troops of Sisera fell by the sword; not a man was left. Well, except for Sisera who flees on foot!

Many women my age bear the Hebrew name Deborah, but it’s waned in popularity like Linda and Sharon. It means “The Bee” as in busy. It is also synonymous with Wise and Judicious. Deborah was certainly busy. A renowned judge, a prophetess and an unfailing leader when the time called for it. Deborah and Barak’s victory—the Lord’s victory—was a turning point for Israel. It wasn’t long before Israel threw off the oppression of their neighbors. Again. As in, stay tuned, peace is temporary for the stiff necked children of God.

Sometimes I can be wise, or a leader and I can be judicious. But I empathize more with Barak. I know what God is capable of and He has shown me that He keeps promises and won’t fail, but do I step out and act on that or do I want someone to “go with me, just in case . . .?” Not always. Do you?

I doubt Deborah originally felt called to be judge, prophetess and leader but she trusted God and allowed Him to work in her. He appreciates a willing heart. And we don’t have to be in such positions to serve God. Remember Deborah’s warning that Sisera would be conquered by a woman? It wasn’t Deborah, despite her chart topping “Song of Deborah”. It was Jael.

Jael was a stay-at-home mom from a neighborhood aligning itself under the Canaanites rather than the Jews. Jael is in her tent that day, cleaning, cooking, taking care of her family. Sisera asks her for shelter and to cover for him if anyone comes looking. This wasn’t just Deborah’s day. This was Jael’s day too. "Come, my lord , come right in. Don't be afraid." She makes him some warm milk and when Sisera falls asleep, Jael drives a tent peg into his temple. Whoa. Talk about Git ‘R Done.

I can’t imagine Deborah and Jael ever met and high-fived each other, but both of these women acted out of their inner strength by allowing God to use them to accomplish His purposes. Rather than doubting our abilities so much, we need to act, knowing we've been equipped for the task He has placed before us. 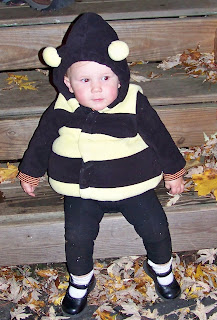 For those of you who always wondered . . .
There were these two Hebrews from the lost tribe of Chicago. After journeying for many long months to speak to the prophetess they'd heard so much about, they arrived in the hills of Ephraim, pausing to ask for directions to the Palm of Deborah.
"Hey, where's da Bee?"
And that's how all the Deborahs that followed got the nickname of Debbie. Thought you'd want to know.

Oh and here's Granny's girl. A suitable outfit for this post, eh?