It's All in the Answer

One of the privileges of parenting teenagers is the endless hours I spend in the car driving to and from sporting events. On a recent road trip back from Volleyball Provincials (similar to state finals) I had three fifteen year-old boys in the back seat who were not only defeated, but victims of a cruel hoax--no one had brought a video game or a selection of DVDs to distract them from the long journey.

Rather than complain, I was impressed when they turned to car games. First came the road sign game, quickly followed by a few rounds of animal twenty questions. When they'd exhausted that game they turned to riddles. My son stumped us with the following:

A man pushes his car up to a hotel and a short time later declares bankruptcy. What happened?
We were encouraged to ask "yes" or "no" questions.
Did his car run out of gas? "No." Was he married? "Irrelevant." Did he own the hotel? "Yes." Did it burn to the ground? "No." And on it went. We asked dozens of questions and still were no closer to the answer.
What happened?
We finally cried uncle and the simple answer was revealed. Figured it out yet?
The man was playing Monopoly.

Ohhh. We all groan.
And for the rest of the car ride sans movie to listen to or video game chatter, I pondered the riddle.
The answer is so simple when we have all the information. Something that is seemingly impossible to puzzle through makes perfect sense in light of the answer.
And isn't the kingdom of heaven like that? The problem makes no sense without the answer.
In our limited knowledge and understanding of God and his kingdom, we spend our lives asking all sorts of questions that have little or nothing to do with the problem, because fundamentally in our fallen and flawed state, we have so little comprehension of the real matter. 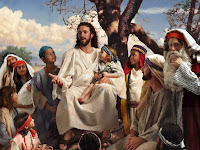 Jesus understood that about us. Matthew 13 gathers together Jesus' seven kingdom parables. His parables describe the kingdom in the language of the day and in metaphors his audience would understand. He opens each one saying, "The kingdom of heaven is like..." and goes on to describe an attribute of the kingdom of heaven to people who have absolutely no comprehension of who he is and why these stories matter. He is presenting riddles that have no answer--yet.
How does the kingdom of heaven make sense without Jesus' crucifixion and resurrection? How does the riddle of God and his relationship to humanity make sense without Jesus' life and death and ascension? It doesn't. Which is why people, even Christians, who strive towards understanding God and their world around them separate from the blood of Christ ask questions that have little or no bearing on the riddle itself.
Open your Bible to Matthew 13 and read the seven kingdom parables. Then read them again. And again.
In doing so, stop asking the questions, and meditate on the answer.
Posted by Wenda Dottridge at November 29, 2009