My name is Julie Lessman … and I am a romance addict.

However, I might add, Margaret Mitchell bears the blame. The moment Scarlett seared Rhett with a look on the windi

ng staircase of Twelve Oaks, I was a goner, my brain irrevocably branded with the burning desire for romance. God help me, I was only twelve at the time when some innocent, unsuspecting person put a copy of Gone With the Wind in my hand. I swear to this day that the binding not only burned my fingers, but it seared my life forever.

You see, when I read that novel at the age of twelve, I was swept away into the world of romance for the

very first time. It captured me like no other book had done, and I immediately set out to write (along with thousands of other love-struck young girls, I’m sure), what I hoped would be “the great American novel.” Obviously my dreams of grandeur didn’t go anywhere, but I

did write 150 single-spaced pages of a story that became the basis (some forty years later!) for my debut novel, A Passion Most Pure. Today, I like to think that not only are Margaret Mitchell’s fingerprints are all over me in my religious devotion to passion, but God’s as well—merging my passion for romance with my passion for Him.

And speaking of religiously devoted, I may well be one of the few GWTW fans whose obsession became a habit—a religious habit, that is, of the “nun” variety. Although I had read the book at the age of twelve (and reread it a gazillion times since then), I never saw the movie until I turned sixteen. Way back then (we won’t go into how far back that was), Gone With the Wind was only re-released every seven years. So when I found out that a theatre in my city was sponsoring a free premiere to all the local religious and clergy, I actually dressed up as a nun to go. One of my friends had a sister in the convent who loaned us novice habits, and off we

went! I sat there mesmerized, shoving free popcorn into my mouth as I watched the emotional tug-o-war between Rhett and Scarlett. It was one of the most thrilling times of my teens … until we ran into the nuns from our high school! I must have looked pretty convincing in the novice garb, though, because one of our nuns started talking to me about a vocation. Are you kidding? A nun who writes romance? Uh, no!

Why would a book like Gone With the Wind impact me so? Romance, pure and simple. Yes, Scarlett was selfish, but what drew me was the pull she had over Rhett—a man who wanted her but couldn’t have her. To me, seeing a strong, male type like Rhett Butler “who wasn’t the marrying kind” give in and marry her because he loved her and wanted to cherish her, spoke volumes to me. Even as a little girl, I sensed that was what romance was all about—finding a man who couldn’t do without you and to whom you were the most important woman in the world. It wasn’t until I became a born-again Christian at the age of 23 that I learned it was a foreshadow of how God sees romance in Ephesians 5:25: "Husbands, love your wives, just as Christ also loved the church and gave Himself up for her."

Now I am not saying that Rhett Butler typified the kind of love Christ had in mind, but he

wanted Scarlett so badly, he was willing to give of himself to get her. No other woman alive could do that to him, only her. Now to me, that’s romance in the most heart-pounding sense of the word—to be cherished, loved and desired by a man who would sacrifice himself to claim you as his own.

Sound familiar? Think about it—the romantic love between a man and a woman is a mere shadow of the love, passion and desire that God has for each of us. And if you don’t believe me, take a stroll through the “Song of Solomon” sometime—a love letter to Israel and mankind from a God who wanted each of us so badly, He was willing to sacrifice His Son. When it comes to romance, there’s no question that God wrote the book—and for me, it’s a true bestseller that always guarantees a happy ending. 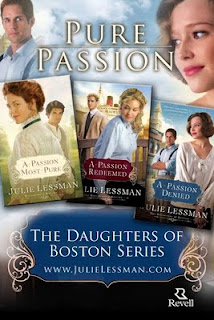 Feel free to leave a comment to be entered into a Daughters of Boston giveaway where you can win a signed copy of your choice of one of the three books in the series, A Passion Most Pure, A Passion Redeemed or A Passion Denied. Good luck!

Julie Lessman is an award-winning author whose tagline of “Passion With a Purpose” underscores her white-hot passion for both God and romance. Winner of the 2009 ACFW Debut Author of the Year, Julie is also the recipient of 13 Romance Writers of America awards and resides in Missouri with her husband and their golden retriever. She is the author of The Daughters of Boston series, which includes A Passion Most Pure, A Passion Redeemed, and A Passion Denied. You can contact Julie through her website at http://www.julielessman.com/. 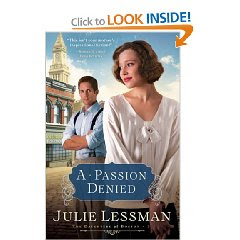 Book 3, A Passion Denied, is the story of Faith and Charity’s little sister, Lizzie, a shy bookworm who dreams of a fairy-tale romance. It unfolds a man’s dark past and a young girl’s shattered dreams … and the God who redeems it all.
Elizabeth O’Connor is the little sister John always longed for. With a fire for God in his belly, he has been her spiritual mentor since she was thirteen, sharing her love of literature and her thirst for God. But when his gangly protégé blossoms into a beautiful young woman bent on loving him, he refuses to act on the attraction he feels. His past won’t let him go there. Unfortunately, “Lizzie” won’t let him go anywhere else … until his dark and shocking secrets push her away.