The Charm of The Magic Faraway Tree

by Narelle Atkins
When we first talked about having a Once Upon A Time theme, The Magic Faraway Tree by Enid Blyton immediately came to mind. It was one of my favorite children’s books and I remember my mother spending hours by my bedside reading it to me at night, in the vain hope I’d go to sleep. Instead I’d ask for just one more chapter, please...
The Magic Faraway Tree was first published in London in 1943 and the Edition I’m currently reading to my children (with yellowed pages and binding that’s starting to fall apart) was published in 1971. Enid Blyton published more than 600 children’s books over her 45 year writing career, and has more than 600 million copies of her books in print. The Magic Faraway Tree is the second book in her ‘Faraway Tree’ children’s fantasy series and she also wrote The Famous Five and The Secret Seven series. 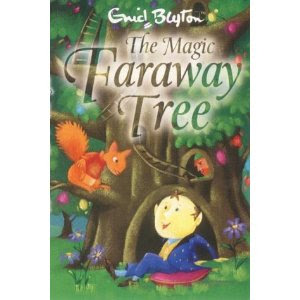 Enid Blyton’s life wasn’t without controversy. Many critics panned her books and a number of librarians refused to stock her books for various reasons. You may remember the fuss many years ago concerning her character Noddy and his friends?
In The Magic Faraway Tree, the three children and their cousin live with their super-cool mother, who occasionally lets them play all day in the Enchanted Wood and visit their other-worldly friends: Moon Face, Silky and Saucepan Man. The Faraway Tree is as tall as the clouds, and a ladder at the top of the tree leads to the different lands that visit the Faraway Tree.
As a child, I loved escaping into the magical world of the Faraway Tree and sharing adventures in the different lands with Jo, Bessie, Fanny and their cousin Dick. (Please note: if you’ve read a recent Edition, the children’s names have been updated to reflect our politically correct society.) In the last few weeks, I’ve reread The Magic Faraway Tree with my children, and I thought I’d share with you a few of their insights into the book.

Quotes about their favorite characters:
"I like Saucepan Man because he listens to stuff wrong and, in the Land of Presents, he gave Dame Washalot a lion instead of an iron."
"I like Moonface because his face is round like the moon and he bakes google buns, pop biscuits and toffee shocks."
"Their cousin, Dick, is greedy and, in the Land of Goodies, he ate a barley sugar door knocker and got himself into trouble."
Quotes about their favorite lands and adventures:
"I like the Land of Toys, but Saucepan Man was put in jail because he was confused about which land he was in and stole some sweets from a lolly shop. The boys pretended to be toy soldiers and rescued Saucepan Man."
"I like the Land of Magic Medicine because the children’s mother was sick and they got a bottle of Get-Well Medicine to make her better."
"I like the Land of Do-As-You-Please because I like trains and the children rode on a train and one of the boys was the driver, but he forgot to stop at the stations."
"The people from the Land of Tempers were horrible and took over Moon-Face and Silky’s homes in the Faraway Tree. Watzisname and the children rescued Moon-Face, Silky and Saucepan Man and helped them send the mean people back to the Land of Tempers."
From an adult perspective, I have an appreciation for Dame Washalot and the constant supply of laundry she washed and hung out to dry in the Faraway Tree. When the children climbed the tree, they had to remember to dodge the dirty washing water she poured down the tree. As a child, I remember wanting to visit the Land of Do-As-You-Please, the Land of Goodies and the Land of Presents. But even in these wonderful lands, the characters still managed to get themselves into trouble and have many adventures. In the Faraway Tree story world, you could definitely have too much of a good thing. Greed and gluttony was often their downfall.
Looking back, I think my childhood vision of heaven was in some way shaped by the Faraway Tree books. As a child, I had a vague idea that heaven was a place far away in the sky, beyond the clouds. A few of the lands that stopped at the top of the Faraway Tree were like a slice of heaven. On the other hand, the Land of Tempers was like a slice of hell, full of bad-tempered people who were constantly fighting with each other.

Are there any children’s books that have influenced your ideas about heaven (or hell)? I’d love to hear your thoughts.
Posted by Narelle at May 20, 2010