by Anita Mae Draper
When I think of children’s books, The Poky Little Puppy is the first one that comes to mind. Maybe I owned a copy. Maybe I read it at one of the houses I lived in. Frankly, I don’t remember because it’s buried in a part of my memory I don’t wish to re-live. But the story played a significant role in my troubled childhood. If I had a shelf for cherished childhood belongings, The Poky Little Puppy would be right up there beside my missing-fur-in-the-ears teddy bear. 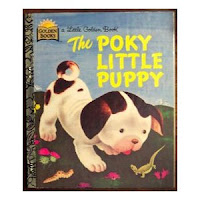 So what is it about this 24 page book which makes it so endearing? I don’t know about anyone else, but I identified with the main character. It’s not that the puppy was poky as in slow, but he was very curious. His curiosity led him to new discoveries, like caterpillars, instead of keeping up with his siblings. Fellow adventurers, his siblings loved to explore on the other side of the fence however, the only way to get there was to dig a hole and crawl under the fence. When the siblings arrived back at home, they were sent to bed without dessert for digging a hole under the fence. When the poky little puppy returned, everyone was sleeping and the dessert was just sitting there so he ate it all. Two nights in a row, this scenario was repeated. On the third night, however, his siblings – whether intentional or not – filled up the hole after they came back. They were rewarded and given their dessert. When the poky little puppy returns, he has to squeeze through the fence to get back into the yard and then discovers that his siblings have eaten all the dessert. He goes to bed feeling sorry for himself.

To me, the appeal of this story is not that the poky puppy was curious, or that he had siblings although I was very curious and had siblings as well, but that he was the loner and went to bed without dessert. For a time in my childhood, the family I lived with ridiculed and abused me continually – verbally and otherwise. I may have been a part of their family, but I was always where they were not. If my siblings got in trouble, I was blamed and received the punishment. If I got into trouble on my own merit and admitted the error of my ways, I still received the punishment. You would not believe the amount of days I went to bed without supper, never mind dessert. So when the poky little puppy goes to bed and huddles under his blanket, belly growling and feeling sorry for himself, I knew exactly what he was feeling.

Which makes me wonder… why did those other 15 million people buy the book? And where did the author, Janette Lowrey (1892–1986), get the idea? Although she wrote other children’s books, most of Texas author Janette Sebring Lowrey’s fiction was written for teens and published by Harper & Row during the 1940s and 1950s. Probably her best known work was her 1950 novel Margaret which inspired the 1958 television show “Walt Disney Presents: Annette” starring a young Annette Funicello. It ran for 19 episodes and was about a newly orphaned country girl who goes to live in the city with an upper class aunt and uncle whom she’s never met and how she adapts to her new circumstances while staying true to herself. 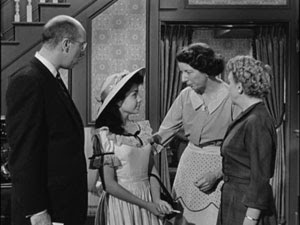 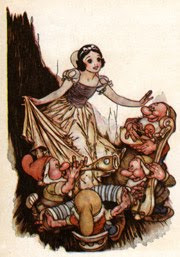 Gustaf Adolf Tenggren (1896–1970) was known for his Arthur Rackham-influenced fairy-tale style when he went to work for the Walt Disney Company in 1936. As chief illustrator for Snow White and the Seven Drarfs, Tenggren was able to give Snow White an "Old World" look which Walt Disney had been seeking for this, the first American feature-length animated film. Under Tenggren’s direction, the seven dwarfs developed their individual characteristics so familiar to us today. With a team of some 700 illustrators, Tenggren worked on such classics as Bambi, Pinocchio, The Ugly Duckling and The Old Mill, before leaving Disney in 1940.
Tenggren also left behind the Rackham fairy-tale illustration style and apparently, never painted that way again. When he went to work for Little Golden Books from 1942 to 1962, he adopted a more simplistic style which still appeals to adults and children.

When I began to research this post, I hadn’t realized the illustrator of my all-time favorite book was so famous. Most artists start small and work towards bigger things but in this case, Gustaf Tenggren went in the other direction. Maybe he was offered big incentives to leave Disney and start for Little Golden Books. Maybe he had to sign a declaration that he wouldn’t ever paint in the same manner as he had while at Disney. I don’t know the answer to these questions but I am curious.

I also don’t know why the name Janette Lowrey isn’t more well-known. I think I would’ve liked reading her other books if The Poky Little Puppy and Margaret are anything to go by.

And although I’m not going to reference all the places I virtually visited to glean bits and pieces of information from, it seems to me that The Poky Little Puppy stayed in the No 1 spot until the hefty Harry Potter books hit the market in 1997. I like to think that’s what it took to dislodge the little book about a curious puppy that put millions of children to sleep.

By the way, I stopped in at my favorite used book store because it was easier to buy an old copy of The Poky Little Puppy than it was to search through boxes of stashed books at home. When the clerk heard what I was looking for she shook her head and said, "You and everyone else." I asked what she meant and she said everyone wants it because it reminds them of when they were young. Imagine that.

Have you read books by Janette Sebring Lowrey or remember watching Disney Presents Annette as part of the Mickey Mouse Club?