The Grandmother of Europe

by Debra Elizabeth Not Victoria Marvin

What does "Victorian" mean to you? "Painted Lady" houses? Full skirted dresses and petticoats over a menacing corset? A society bursting with rebellion under a controlled, conservative and emotionless front? Charles Dickens' London?

Here's my history lesson on Victoria's before and after--Her ancestors and descendants. Don't run in fear, this may just help you on Jeopardy someday.

Even for a colonist on this side of the pond, it would be difficult to have gained adulthood without hearing of Henry the Eighth, Queen Elizabeth (yes, there have been two of them) and Queen Victoria. Perhaps the term "the Regency" leaves you confused as well? Have a seat and I'll help you out. 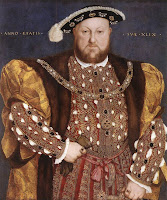 Go ahead and connect The Tudors to the big guy with the six wives! Despite all his bravado and big appetite (power, women and rich food included) Henry the Eighth's throne went to his sometimes legitimate, sometimes not daughter Elizabeth 1. What happened next is enough for another post, so let’s just say . . . 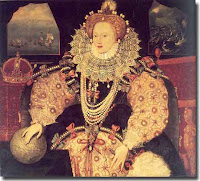 The Stuarts 1603-1714. And finally the House of Hanover. The Hanoverians were very European, basically Austro-German. And like the two houses before them, changes had a lot to do with religion. Britain's Act of Settlement of 1701 decreed no Roman Catholic could be on the throne. Stuarts Out, Hanovers In.

Here is where Victoria’s story begins . . .

King George l became the first monarch of the House of Hanover, followed by George II, then George III. (Hmmm, I’m seeing a pattern here and it’s not just because I’m a registered Republican.) Things were going well, in fact he was a good king, happily married and had 16 children. What bliss! Well, except for a costly war with France. 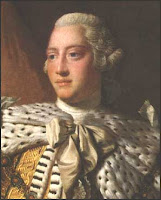 George upped the taxes on those little colonies across the sea and the thankless fools dumped tea in Boston Harbor. (This is King George's portrait, wearing the same hairstyle as our Almost King George/President George Washington.)

By 1781 George is humiliated by the loss. A surrender at Yorktown and all that . . . By 1788 he’s considered off his royal rocker. Insane. His son--you can see this one coming --George IV is made Regent. (Regent means “I’m not really the king but I’m standing in for the king because he’s unable to be king, so let the party begin!”) The Regency Period in England is officially those years 1811-1820 but can be stretched a bit to describe the social structures, fashion and flair of the Beau Brummel and Jane Austen years.

Upon George III’s death, his son goes from Regent to King: George IV.
This George was a wild dude, having several mistresses and marrying a Catholic, drinking heavily, and he suffered the rich man’s disease of gout. Soon his health and mind were in decline. He had no surviving legitimate children and his older brother Frederick had died, so on George IV’s death the throne went to his brother William IV at 64 years of age. Next in line? Their niece Victoria.

Victoria married her European cousin Albert four years later. Check out their love story from Lisa's post yesterday! They had nine children. Their second was Edward, heir to the throne.

Victoria and Albert’s children all married into the other Royal families of Europe, hence her nickname The Grandmother of Europe. This alliance by family was at its peak during her reign and by the time of her death in 1901, the continent had enjoyed a long period of peace. This family togetherness did not last long. Without ‘the grandmother,’ hostilities soon escalated into WWI. 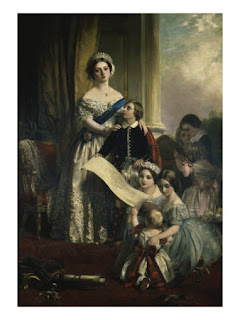 Among Victoria’s thirty some grandchildren were Kaiser Wilhelm of Germany and the beautiful Alexandra who married Czar Nicholas of Russia.

Where’s the link to the present Queen?

Victoria’s son went on to be King Edward VII, his son was George V. This George had two sons who also wore the crown:
Edward VII was King for less than a year before he abdicated to marry divorced American Wallis Simpson, giving his brother the title of King George VI.

George VI married Elizabeth Bowes-Lyon. Together they braved the bombings of London during WWII. The much-loved Mrs. George VI came to be known as the Queen Mum, when their daughter ascended to the throne as the current Queen Elizabeth II.

As you may know, she has four children: Charles, Anne, Andrew and Edward. Funny thing about royal families. If an older son dies, the crown does not necessarily go to his brother, but instead his son is next in line. This is why Prince William, that little cutie, would be king rather than his Uncle Andrew. Well, after Charles anyway, and 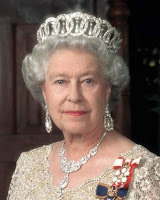 gossip says the title may skip Charles and go to William because of that little Diana/Camilla thing.

Queen Victoria reigned for 63 years and holds the title of longest reigning English Monarch. Queen Elizabeth ll (the great, great granddaughter of Queen Victoria) has ruled for about 58 years.

If you're still hanging in with me, I imagine it's because you like history, so please tell me what period in history you're most interested in. Was there any event or book that encouraged this?

Do you enjoy historical fiction? Any favorites?
Do you ever wonder how many purses Queen Elizabeth has?

Anyone else hungry for a scone?
Check out my review of THE YOUNG VICTORIA:
http://inkwellinspirations.blogspot.com/2010/01/young-victoria.html
Posted by Debra E. Marvin at May 26, 2010