by Anita Mae Draper
It's Victoria Day in Canada today! Ah, the freedom. But it's not political freedom we're talking here. Canada attained independence in 1982 although it's still a member of the Commonwealth of Nations and has the reigning British monarch as a figurehead.

In Canada, we use Queen Victoria's and our present monarch, Queen Elizabeth's birthday for a celebration which stands for a whole list of things that start this weekend and all mean one thing...
SUMMER!
Yes, Victoria Day in Canada means:

- Freedom from clothes! Leave that outerwear behind and feel the breeze on your bare skin. Yeehaw!

- Freedom to plant! It doesn't matter where you live in Canada, you can safely plant your garden on or after Victoria Day and you don't have to worry about frost.

- Freedom to camp! Yes, campgrounds open this weekend and quickly fill with exuberant party-goers who've shed their clothes in their eagerness to become mosquito bait.

- Freedom to suntan! Canadians suffer more sunburns on Victoria Day weekend because of all those clothes they've left behind in the house.

- Freedom to go to the beach! Regardless of how cold that water is, all beaches in Canada open for public swimming and scantily-clad bodies show off their ghastly white skin*.

- Freedom to open the cottage. Highways are jammed as cottage country owners leave their urban homes to spend the weekend mucking dead moths, flies and rodent feces out of their chosen home-away-from-home. 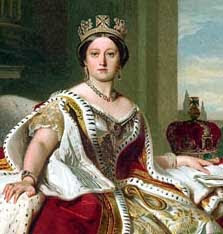 Victoria was born in 1819. She took over the throne in 1837 at the young age of 18 upon the death of her uncle George IV. She ruled as queen of the United Kingdom of Great Britain and Ireland and empress of India until her death in 1901, when her son Edward the VII became the King of England. 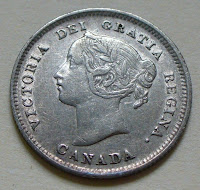 Here's a Canadian 5 cent piece from 1899 and yes, that's a young Queen Victoria you see there. 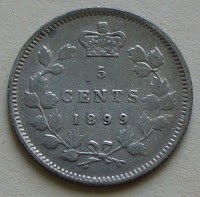 As a member of the Commonwealth of Nations (British Commonwealth), the current British monarch is displayed on the reverse of all Canadian coinage.

Back in 1845, the Legislature of the Province of Canada declared May 24th, the queen's birthday, a national holiday. In 1952, an amendment to the Statutes of Canada established he Monday preceding May 25 as the actual holiday. That means Victoria Day is the 3rd Monday in May. 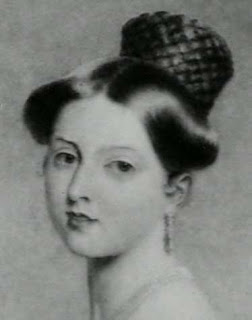 Here are some little know facts about Queen Victoria:
- Her image was used on the first postage stamps ever printed back on May 6, 1840 in the United Kingdom.
- Young Victoria was taught to keep her chin up by placing a prickly holly sprig under her collar.
- Although she ruled for 64 years, Queen Victoria never learned to speak perfect English because her mother only spoke German at home.
- Queen Victoria was the last teenager to rule England.
Victoria Day is always the weekend before the U.S. Memorial Day.
So, what are you doing either this long weekend or next weekend for Memorial Day?
*This is not to imply all Canadians are caucasian because we aren't. Canada is made up of a diverse ethnic population. It's just that pale skin which hasn't seen the sun in 9 months looks . . . ghastly.
Posted by Anita Mae Draper at May 24, 2010