By Susanne Dietze
Our leather recliner is the go-to spot for cuddling kids in my house. When one of my children needs a bit of Mom Time, we head toward the chair, put our feet up, get comfy, and snuggle. Sometimes we just talk; other times there’s a book involved.
I know these days of snuggling are numbered. The kids will grow too big to fit on my lap. They will start to complain about my coffee breath. Or (as Kid #1 is starting to do) they'll change, and maybe prefer to get their affection in the form of touching me with a toe while we're on the couch.

So when someone wants to snuggle with me, I open my arms and settle in. The other day I had a small, warm body on my lap, and though the child in question can read chapter books quite well by himself, he and I perused a picture book – the sort of book we adults don’t much discuss but which, in my humble opinion, provide soothing pleasure. The combination of text and artwork invites leisurely reading and the chance to savor the details in the pictures.

The book was The Runaway Bunny, Margaret Wise Brown’s 1942 classic, illustrated by Clement Hurd. (They’re the team responsible for another family favorite, Goodnight Moon.) In this short, sweet little story, the baby bunny decides to run away from home. There’s no reason for running away that I can discern, other than rebelliousness. But he’ll go anywhere and will change his form if necessary to escape. At every point, however, he is rebutted by his loving mother, who always runs after him with loving arms extended. (Or paws. Whatever rabbit arms are.)

In the zillion-odd times I’ve read this story, I’ve thought about how I’d do anything to keep my kids safe, just like the Mother Bunny. But to be honest, I relate to this story more as the child than the mother. Part of it goes back to being a kid: I remember acknowledging the parallel between Mother Bunny and my own mom, whose love was fierce and protective. Granted, I didn’t run away from home. I did other things, though, from painting blue streaks in my hair to dating Wrong Man on Campus.

Even though my hair is no longer blue, I continue to relate to the story as a child. I’m aware of how much I am still like the Baby Bunny, especially in my relationship with the Lord.

I’ve chafed at God’s protection and inched away from Him, sneaky-like. Other times, like Baby Bunny, I’ve informed Him of my great plans.

“I am running away.”

And I’ve run, believe me, I’ve run. I’ve thought my own ways to be supreme, ignoring God’s Word and His plans for me. Talk to that person who’s hurt you. Forgive. Let go.

No way, God, I've said with my words and my deeds. I'm running away.
I don't always know why I do it. Maybe sometimes the pain of where I am is too deep, so I forget that the pain goes with us when we run. Maybe I yearn for adventure, change, or the (perceived) thrill of sin. Maybe I get a bug in my craw and I disagree with God, just like self-righteous Jonah (and look how well that turned out.) Sometimes, though, there’s no concrete reason for me to run, just as Baby Bunny offers no reason. It’s rebellion, pure and simple.

To his declaration of intent to take off, the mother bunny replies, in the matter-of-fact manner of a confident love, “I will run after you. For you are my little bunny.”

So the baby increases his threat. He imagines ways to escape his mother, forms he might take on to disguise himself. Situations where she cannot follow.

“’If you run after me,’ said the little bunny, ‘I will become a fish in a trout stream and I will swim away from you.’”

The mother insists, “I will become a fisherman and I will fish for you.” 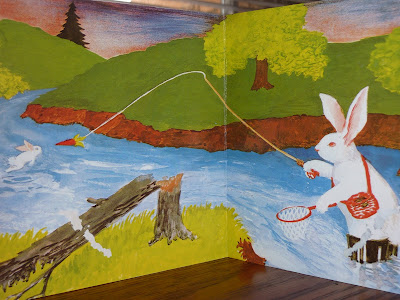 Throughout the story, the mother changes into whatever is necessary in order to seek, await, or receive her baby. She is willing to become the mountain he’ll scale if he becomes a rock climber, the gardener to tend him should he transform into a crocus, or the tree where he’ll nest if he sprouts wings. She’ll become the wind itself in order to blow his sailboat to safety, or take on human flesh to embrace him if he becomes a two-legged boy. The mother will give up herself to be with and protect her baby.

How like Jesus, taking on our flesh to reach out to us. How like our Savior, Emmanuel, who became man to seek, await and receive us. I can’t help thinking of several Scriptures that remind me that God did whatever it took to “run after” me:

The Word became flesh and made his dwelling among us. John 1:14

If a man owns a hundred sheep, and one of them wanders away, will he not leave the ninety-nine on the hills and go to look for the one that wandered off?...In the same way your Father in heaven is not willing that any of these little ones should be lost. Matthew 18:12, 14

But while (the prodigal son) was still a long way off, the father saw him and was filled with compassion for him; he ran to his son, threw his arms around him and kissed him. Luke 15:20

God knows our needs, wants, yearnings, and failures. He loves us despite our rebellions, grumbles, and attempts to run away. He took on our flesh to show us just how much.

In the end of the story (to the unwary, spoiler alert!) the baby accepts that he can’t get away from his mother, no matter how hard he tries. There’s nowhere he can go, no form he can change into, where she won’t follow. Her love is always with him. So he settles in at home for a nice carrot and a snuggle. 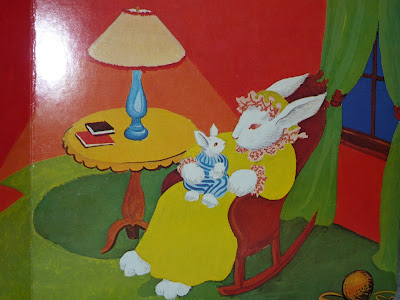 Simple truths, perhaps. But I still need the message that God isn’t through with me yet, that I’m worth enough to Him that He’ll chase after me. Love me. Await me with expectant arms, the way I wait for my kids in our leather recliner, inviting a snuggle. Every rebellion in my life has been a sign of my need for God, a faulty attempt to heal something broken that only He can heal.
I’m working at being more like the baby bunny at the story’s end, settling into a deeper acceptance of God’s love for me, satisfied with His provision. There are still times when I bolt like a rabbit from the pressures of life, my heart thunking wildly in fear. But one of the most amazing things about God is that even when I’m running off, He’s with me on the road, offering me yet another chance to come home.

Please forgive the wretched quality of my photos. I propped the book on my kitchen table and went to town. And it shows!