By Dan Walsh
My summer began with a bang.

The long-awaited sequel to my amazing debut novel, The Unfinished Gift, came out on the first of June. It’s called, The Homecoming (Revell). Both received 4.5 stars from Romantic Times magazine. The reviewer compared my writing in the new book to international best-selling author Nicholas Sparks.

This, of course, sent shock waves throughout the Christian fiction world, skyrocketing The Homecoming to the top of the bestselling charts. Within days, interview requests started pouring in from all sides: magazines, radio talk shows and some of the busiest blogs on the internet. The producers of Oprah and Glenn Beck wrestled over me with Revell’s publicity department, trying to be the first to get me on their show. We finally agreed I’d do both shows on the same day (Oprah had to settle for an interview by tape). Sales of The Homecoming quickly topped the million mark by the end of the week.
To keep me from signing with someone else, my publisher instantly sent out a new contract with a six-figure signing bonus. My wife and I used part of it to pay off the mortgage on our house. Then we took a two-week cruise through the Mediterranean, scouting out new locations for my next book. It’s nice to know, that with the success of The Homecoming, every other book I write from now on is guaranteed to become an instant bestseller, right out of the gate.

Well, no. That’s not exactly what happened.

But everything in the first paragraph is true. Even the part about the sequel being long-awaited (I know I waited a long time) and the bit about my debut novel being amazing (some who read my first book said they thought it was amazing).

But everything after that… the stuff dreams are made of.


It is amazing how easily our minds conjure up fantasies. I’ve been doing this all my life. I remember being in the ninth grade, decades ago. I had just been picked to be our middle school basketball team’s starting point guard. A high honor. I would be the guy bringing the basketball up the court on every play, the guy setting up the plays. Every eye in the auditorium would be on me.
Wanting to be worthy of all the acclaim I deserved, I practiced for hours every single day, on a basketball hoop in our driveway. Even in the dead of winter. I shoveled snow just to clear enough space to play.
I can still recall the ridiculous fantasies I created as I played. I was no longer bundled up in my coat, hat and scarf bouncing a ball in the snow. I could hear the roar of the crowd, the whole school chanting my name, as I weaved the ball in and around the other team’s defenders. Just before the buzzer sounds, I leap into the air, a flawless jump shot. Nothing but net.

I had won the game.

The fantasies grew from there. College scouts watched me play. I got a full scholarship to Duke University. We made it to the Final Four. Through my amazing skill and incredible shooting, we win the National Championship. The NBA comes calling. All of this going on in my head, as I stood there like an idiot bouncing a basketball in the snow.

The truth fell a tad short of this.

I did get to hear the crowds chant my name, and I did win several games for my school, back in ninth grade. But I didn’t grow a single inch after that. We moved back to Florida to a high school with a lousy basketball program. I busted my ankle badly a year later, forever putting an end to all my hoop dreams.

The moral of this story is not that desires or fantasies are bad. But they can be. I’ve found they can rob me of the simple joys and simple blessings God is bringing into my life every day. I’ve heard it said that contentment is not getting what you want, but wanting what you have.

In Ps. 103:2, David says, “Bless the Lord, O my soul, and forget not all his benefits.” This is the habit I’m seeking to cultivate now. Deliberately spending time thinking about the things He has already done in my life. When I do this, I find the list is quite long. Every now and then, there is something big on that list. But most of the things are…small-ish.

But that doesn’t discourage me. What I see is that God is willing to pay that much attention even to the details of my life. David also said, “Many, O Lord my God, are the wonders which you have done, and your thoughts toward us…If I would declare and speak of them, they would be too numerous to count” (Ps 40:5).

I never got to play for Duke. And I’ll probably never see the day when Oprah and Glenn Beck are fighting to get me on their show. But the God of the Universe loves me with an everlasting love, and has more thoughts about me and my life than can be counted.

This is not a fantasy, but a cause for real joy and genuine contentment. 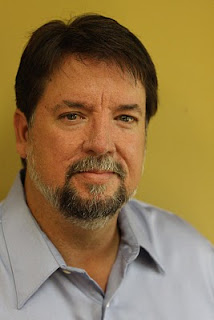 I’ve been happily married to the only woman I’ve ever loved for the last 33 years. We have two grown children (one grandbaby on the way). We’ve lived in the same house in the Daytona Beach area for the last 25 years , and I’ve been a pastor here all that time. My first book, The Unfinished Gift, released last September and is doing well. It has just been named a finalist in two categories for ACFW’s prestigious Carol Award (formerly Book-of-the-Year). In June the sequel released, called The Homecoming. Both books received 4.5 Stars from Romantic Times. My third novel, The Deepest Waters, comes out in the spring. My publisher, Revell, has signed me to write two more books for them through 2012.
http://www.danwalshbooks.com/
http://danwalshbooks.blogspot.com/
http://twitter.com/authordanwalsh

No sooner is Shawn Collins home from the fighting in Europe than he's called upon to serve his country as a war hero on a USO bond tour. Others might jump at the chance to travel all around the country with attractive Hollywood starlets. But not Shawn. He just wants to stay home with his son Patrick, his aging father and to grieve the loss of his wife in private. When Shawn asks Katherine Townsend, Patrick's former social worker, to be Patrick's nanny while he's on the road, he has no idea how this decision will impact his life. Could it be the key to his future happiness and the mending of his heart? Or will the war once again threaten his chances for a new start?

The Unfinished Gift on Amazon (also available on Kindle and as an Audio book) - http://www.amazon.com/Unfinished-Gift-Novel-Dan-Walsh/dp/0800719247/ref=tmm_hrd_title_0
Posted by Unknown at August 18, 2010