by Wenda Dottridge
My family and I just returned from a long-weekend at my parents' place.
Actually, it isn't just my parents' place. You see, they retired to a lake-front property on the same beach as two of my mother's sisters, three of my cousins, and one cousin-once-removed. Another sister lives a five-minute walk away on another beach. That accounts for 50% of my mother's siblings. Then there's the other three sisters and one brother who pull in their RVs.
My father's family is represented by his niece (my cousin) who has a cottage about ten miles up the lake at yet another beach. So, when we go to visit my parents, there is usually some form of family reunion involved. This year it was a small gathering of only forty or so relatives. 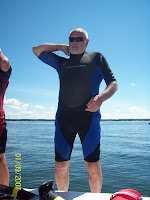 As we move from cabin to cottage, catching up with cousins and aunts and uncles, there is one topic of conversation that never grows tired: Wayne.
Wayne is my father.
Wayne's kingdom is his 20'x40' workshop at the back of my parents' property. At one time it housed a half-built home-built airplane (a Quickie II - but's that another, not-so-happy story); the essential remnants of his automotive garage that he operated for thirty + years; a full woodworking shop with a tool inventory that would send my mother straight around the bend if she ever catalogued it; a load of raw tamarack that he is hand millilng and turning into their cottage's doors, railings, kitchen cabinets, and window trim; a beer fridge (more on that); his sawdust covered homemade wine collection; boxes filled with sixty years of Popular Mechanics and thirty years of several airplane magazines; a welding station; and, who knows what else. These days it holds all the above, less the kit-build airplane (SOLD!); and my brother's (who lives in Holland) pick-up truck; a quad that might work; a dirt-bike in similar condition; a couple of Sea-Doos in pieces; and, various other items "under repair." Outside, he added a lean-to to store his scrap metal. Now the lean-to houses his father's 1952 International truck that he plans to restore and drive across Canada after he finishes the house and the fifty other projects currently on the go. Did I mention he is seventy-three.
Every day is an adventure for my father, and for those who have a chance to bump into him.
One year we arrived at "the lake" to hear about his batch of homemade beer. Every visitor to his shop was offered his d-i-y beverage with pride. "Mixed it up myself in the bathtub. Instructions on the kit said to let it sit for six weeks but I think it's about ready (after two weeks). Here. What'd'you think?"
Everyone loves Wayne, so they politely sipped, swallowed their grimace, and smiled, assuring him that it was indeed great. And proceeded to discreetly water the tomatoes.
My folks retired to the lake so he could enjoy the view of Saskatchewan's endless skies, listen to the breath of waves on the beach, and listen to the birds. Except, after a career playing with loud power tools sans hearing protection he doesn't hear so great anymore, so the birds are usually drowned out by his collection of perpetually operating power tools. And the skies. Well, he does have the heart of a poet under his gruff exterior, and he'll pause between projects to appreciate God's wonderful creation.
Stories about Wayne always involve much laughter. If someone isn't telling us about the accident with red paint on the stairs (and the immediate assumption that my mother had finally done Wayne in) or about the two-inch metal sliver embedded in his tough hide and removed (by himself) with a pair of pliers and smeared with his cure all--engine grease, he's laughing right along telling us in his colourful way about  the time he fell asleep piloting his small plane west across the Rockies and woke up two more mountain ranges over. One relative suggested we write to reality TV producers to pitch a new television show: Wayne's World. There's enough material in his day-to-day life for several seasons. It's not just what he does, it's how he does it. With true red-neck, prairie-boy panache.
We stopped by my cousin's cottage--the one on my dad's side of the family--and her husband pointed to his newly installed satellite dish perched at the highest point of his roof. He'd asked for help from Wayne to install it on a lower section of roof, but Dad just stretched on tiptoes at the peak of the lower roof and reached until he almost couldn't hold the dish and then proceeded to bolt the "sucker" in place. My cousin's husband, several inches shorter than my dad, smiles when he says, "Well, I guess it's there to stay now."
Even after being brought up in his home, he still surprises me. Like the time I was visiting when they were building their cottage. The roof trusses arrived without a crane truck. Not a problem. He drove his bobcat into the shop. Sparks flew from the arc-welder. Every few minutes he emerged from the shop, shirtless of course (who wears a shirt to weld?), to pick another hunk of metal out of his stockpile. He drove the bobcat out an hour later with a thirty-foot boom attached to the bucket. A few ropes and a chain, pressed labour from his brother and nephew who showed up for coffee, and two hours later all the trusses were in place. (You saw the house picture above, right!)
The kids all adore him. My niece, visiting from South Africa two years ago, got the full Wayne treatment when he took her for a Sea-Doo ride. When he flipped it, the first thing he did was check that he still had his toothpick. Two years later she's still giggling about Wayne.
I could write Wayne stories all day. They never end. Because he's a character. With a few descriptive words and a line or two of dialogue, everyone can picture him, which is why he's so fun to talk about. It's taken me almost eight years of writing fiction to learn that characters in stories need the same traits as Wayne.
Characters need flaws--big flaws. Like, he's deaf as a post and won't wear a hearing aid. And he mows his lawn when the neighbours are entertaining. He doesn't listen to my mother (and not just because he can't hear). He burps in public and goes shirtless at dinner. He moved to a left-leaning province for the senior's social benefits and free health care and emphatically and vocally votes "right."

And yet he's wondeful. People love him because there is nothing he won't do for you if you have a need. He's built or contributed to half the cottages on his beach, giving of his time and expertise with patience and enthusiasm. His laugh booms and his hugs are like being squeezed by a loving Sasquatch. He reads slowly, but widely. There isn't a person alive he couldn't find common ground with and discuss their interests intelligently. His faith is simple, and deep.
And the other thing he shares with all great book characters is great dialogue. He holds nothing back. Instead of living inside his head, with all this thoughts and worries and concerns bound up tightly, he says what he thinks (or doesn't) and whatever he says is usually colourful and always in his own unique voice.
Why do we love the books we love? Usually it is because of the characters. There are some writers I'll pick up simply to lose myself in their prose (okay, there are probably only two: Michael Ondaatje and Margaret Atwood) but for the most part, we keep reading because of  compelling characters. Whether it is Brandilynn Collins' phenominal brain-injured mystery writer in Dark Pursuit working to solve his granddaughter's murder before it happens or Francine Rivers tortured Hosea in Redeeming Love, we are looking for characters to step off the page and into our lives.
If you are a writer/aspiring writer, you can't go wrong emulating the true characters in your life to build your story-people. Not to copy them, but to see what it is about them that keeps everyone around them entertained and engaged. And if you're a reader, think about the characters you've never forgotten in books and the ones you know in real life.
Now that you know about my favourite character, I'd love to hear about your's, real or imaginary.
Posted by Wenda Dottridge at August 04, 2010