When to Hang On and When to Let Go

Debra E. Marvin
I’m here to say, try some things while you’re still young (I'll let you be the judge of ‘still young’). Some of you may know I’ve gone parasailing (success--obviously or I wouldn't be writing this blog post), tried windsurfing (not) and done a few things on an extension ladder than no one should ever do. But today I’m sharing one amazing way to vacation that is truly unbelievable and unforgettable: Whitewater rafting. Not only do you have to know when to hold on, but when to let go! 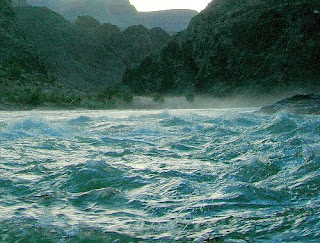 A few years ago, when my bones didn’t give me so much ochita, one of my best friends and I decided to raft the Colorado while we were still ‘young enough’ to do it. She’d just broken up with boyfriend number…oh, I lost count, but let’s get on with the story.

My friend and I, who shall remain nameless here, arrived at the PHX airport and drove to her aunt’s house in Prescott AZ. (There, in a small restaurant, we saw a waiter who was quite possibly the most handsome young man I’d ever seen and I’m sure he was a wealthy duke, on the lam from his family who had arranged a marriage for him that would forever part him from his true love…but I digress, and apparently read too many Barbara Cartlands as a teenager.) Prescott is a lovely place. You must visit!

I can’t get into every detail of the five night rafting trip, so I’ll stick with the highlights. Yup, that’s right. This ain’t no theme park ride. This is living between a rubber raft and mile-high stone walls. Cold, cold nights, scorching hot days and freezing water 24/7. Welcome to the Grand Canyon. 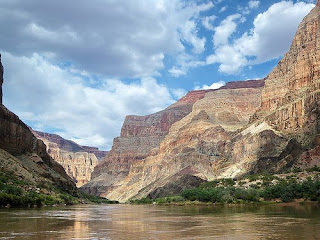 There are multiple rafting companies using a variety of rafts: from mechanically powered pontoon boats, to the typical paddle boats. Paddle boats employ paddlers. Duh. Think about a little arm fatigue, then think about the fact that every muscle and bone in your body comes into play.

Some companies have oar boats manned by a guide. They carry supplies and sometimes guests—easier for younger/older guests. It's amazing to watch the guide, sitting high up in the middle of the boat, maneuver through rapids with big monster-length oars. Incredible! 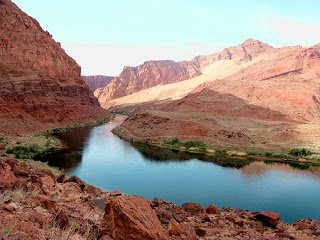 The trip is nothing less than other-worldly. You can’t really take in its immensity when you view the canyon from its rims. But to start down river from Lee’s Ferry and gradually descend into that massive beast not knowing what you’ll encounter before it spits you out at the other end? It’s like reading a great book. Only you can die from it.

The camping is great and I can’t say enough about the food. (And I love to talk food, but the water’s ‘the thing’ here.) We took turns helping with meal preparation and dishes but it felt good to be involved and walk around a bit before crawling back onto rafts or into our tents. 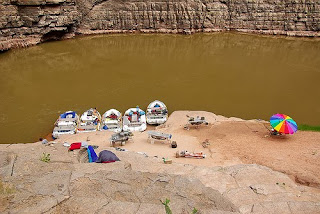 Before I get into the best of my ‘running the rapids’ stories, I have to tell you about a hike we took one day after a lunch break. We walked into a green place you'd never expect to find in a canyon owning hundreds of colors of stone, and were thrilled with the number of flowers, patches of wild orchids and primrose off the bloom. Lovely. We even saw a Collared Lizard betrayed by the black and white spotted skin on his head and neck. 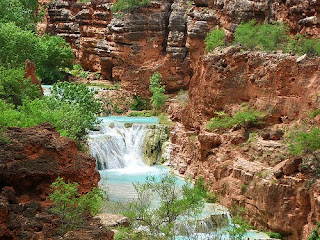 The air was different. It smelled green under the canopy--an anomaly in the otherwise humidity-free canyon. Suddenly we stood only yards from a waterfall. White on gray, framed in greens and pinks. A miniature paradise. The water’s power was mesmerizing that close--so different than the silence of the river we’d just walked away from. The canyon holds many such secrets! 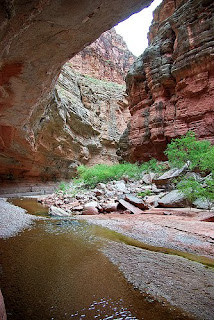 Did I tell you how mind-numbing, not-to-mention flesh-freezing that river is? Whooda Thunkit. Air temps in the eighties, nineties and more—this is Arizona, of course—do not mean the water’s warm. I might say, even colder by comparison. Owing to deep, deep water release from the dams upriver, the Colorado is stinkin’ cold! 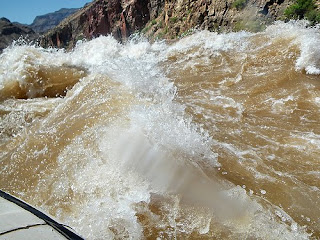 We’d heard the guides discussing our run at Hance Rapids, coming up next. We’d managed to do well each day but that day, even the guides’ voices seemed full of tension. I remember straining my neck to peer ahead. There are right and wrong ways to enter rapids. The oar boat ahead of us seemed to be going in sideways. Could that be the best thing? They seemed headed for sure disaster, the boulders were monstrosities in their path. I watched a couple in their forties thrown from side to side, and the whole raft disappearing at one point, only to reappear on the crest of a roller. Their guide, Blade (that’s another story) stood as he fought with the giants, cranking down on an oar. As we watched, we all felt our bodies twist and turn as if to help him in his Herculean efforts.

When our guide, Duff, shouted, “Get out of there!” the hair stood up on the back of my neck. Sort of a 'we who are about to die, salute you' moment.

All color drained from my buddy’s face and I started giggling uncontrollably, an alternative to crying, I suppose. My little fit of hysteria ended and I took a deep breath, prayed and pretended this was all a scene in a book I was reading. Writers are weird like that.

Duff called out, “Go, Go” and we started to dip, dip, churning furiously. The boat snapped and bent, twisting one hundred and eighty degrees in the other direction, then rode a crest of a wave that left me paddling Arizona air only. My heart was lodged in my throat; my body was heading toward a boulder the size of a pick-up truck.
The boulder disappeared—I guess we intimidated it—before I had the sickening feeling that we were flipping. We threw our body weights to counter it, without thought, and I closed my eyes as the resulting wave of water washed over us. So deep it muffled the roar of the rapids. Emerging from the water, we churned that water like cartoon characters.

Suddenly the ride was over and we came to rest in the eddy, that peaceful place of prayers where everyone who’d gone before us became praying people: Thank God we made it.

So I suggest for your next vacation, you try something big. You won’t know freedom until you’re willing to let go and fall . . . or fly. But God is always there to catch you. This doesn’t have to be about vacations. It can just be about that decision that’s keeping you awake at night. Fears are not all bad. They keep us from doing too many stupid things. But they also hold us back from the amazing.

Do you trust Him? 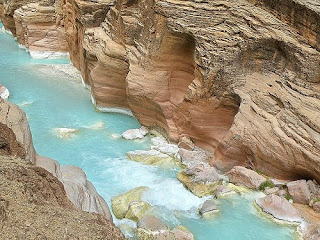 I wish these were my photos but I've borrowed them from a great photographer--check out Al_hikesAZ courtesy of Flickr for many more. I didn't...ahem...have my camera that week, and it was before digitals and waterproof were available, anyway.
Posted by Debra E. Marvin at August 17, 2010