by Debra E. Marvin
I’m here with a call for authenticity in my favorite holiday, that gastrointestinal extravaganza, Thanksgiving. Who am I to say so?
I speak with the authority of one who was wakened (woke? awoken? waked? In any case I ceased sleeping) because of the glorious gobble of wild turkey just last week. I lay huddled in a quaint shelter while the cold Atlantic wind battered the Massachusetts shoreline. It was so…Plymouth Plantion-ish. Well, except I was wearing a hooded sweatshirt to bed, and we were on Cape Ann. 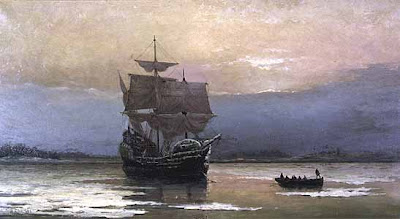 The Pilgrim chicas spent days preparing for a harvest celebration meal. Were they expecting ninety members of the Wampanoag tribe to show up and stay for three days? (They did not bring their wives along to help in the ‘kitchen’, either.) At least these guys pitched in with venison.

Take heart. The meal did include turkey and squash!
The Pilgrims might have been able to add some foods they’d brought by seed from Britain: onion, leeks, sorrel, radishes, and herbs like liverwort and watercress. Fruits—notice no mention of cranberries—included dried gooseberries, raspberries and grapes. Added to a ground cornmeal with bear grease they could make a steamed ‘pudding’ dessert. Yum O. No artificial ingredients you can’t pronounce.

Records show that only four of the pilgrim wives survived the previous winter as well as three to five teen girls. Do you suppose these ladies gave a hearty thumbs down on the idea of making this a yearly tradition? Thouest would be correct. It wasn’t until the writings of William Bradford resurfaced around 1854 that New Englanders began celebrating ‘Forefather’s Day’.

Another elementary school fact to shake off: Don’t think the Pilgrims walked around in those black clothes with big white collars, crazy buckled shoes and belts, and odd tall hats. Thee maketh me chortle. This was probably created by the first mural painter to dream up a scene. It’s true that religious refugees like the Puritans and the Pilgrims may have adopted the Dutch fashions while fleeing persecution, but surely thou jests. You try keeping those collars and aprons clean while fighting to survive in a cold, wild land… 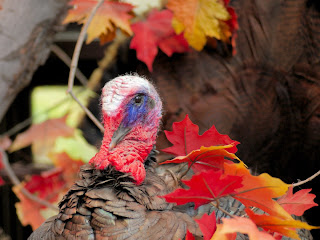 But I digest. I mean digress.
Back to food. I love turkeys. One winter, our neighborhood wild flock took to overnighting at the edge of our woodlot. I’d go out in the morning and often see their tracks all over the snow next to my truck. Once I caught them still roosting in the shrubs and trees. They were none too happy with me and hopped and dropped and gobbled and squawked. Big brown and beautiful. What's not to love about that?

I do see turkeys everyday. The domestic kind. Soon, I’ll drive by and they’ll be gone. It happens every year and I can't figure out where they go. My money is on North Carolina where pilgrims can grow hearty sweet potatoes to be proud of.
Okay. Truth is I know those big white birds are destined for your table. They can’t fly like their brown cousins. Sadly, they can’t even mate because they’ve been bred to have such large chests, that the male cannot… well, I’ll leave it at that.

Image by Bill Swindaman via FlickrI’ll end with a quote from Ben Franklin’s letter to his daughter after his suggestion of making the turkey our national bird:

“For my own part I wish the Bald Eagle had not been chosen the Representative of our Country. He is a Bird of bad moral Character. He does not get his Living honestly. You may have seen him perched on some dead Tree near the River, where, too lazy to fish for himself, he watches the Labour of the Fishing Hawk; and when that diligent Bird has at length taken a Fish, and is bearing it to his Nest for the Support of his Mate and young Ones, the Bald Eagle pursues him and takes it from him . . .”

So I have to ask. White meat or dark?

Enjoy the holiday, whatever way you see fit to celebrate. The Pilgrims headed west, across an endless ocean, to practice their religion freely. They were thankful for the gift of freedom and for the friendship and support of a tribe of natives who showed them how to survive in a new world. I'm no expert but their true story is a fascinating one and I hope this will encourage you to discover more about it.

"All great and honorable actions are accompanied with great difficulties and must be overcome with answerable courages."
— William Bradford