What Are You Looking At?

by Susanne Dietze
Several days a week before I set myself down at the computer, this is what I do:

That’s me in the red dress – or rather, that’s the backside of my "Mii" avatar on our Wii gaming system. This particular photo shows what I see when I am “Super Hula Hooping” on Wii Fit, a program which enables me to exercise in the privacy on my own home.

There’s a reason I enjoy the phrase, “privacy of my own home.” I do like to get outside and play, but the Wii Fit is a nice way to burn calories without providing people the opportunity to laugh at my gawkiness. Still, I can’t escape scrutiny altogether. When my kids hear the Hula Hoop music, they come running to watch the show.

I grant that I’m entertaining to watch. To Super Hula Hoop, I stand on a balance board and swing my hips in wide, even circles just like I’m twirling a real hula hoop. I lift my arms to catch more “hoops” and keep on twisting. The Wii counts the spins for me, records the unevenness of my circles, and validates me when I’m done. The downside? Well, I’m gyrating without a hula hoop. If you’re watching me, I look like an idiot. 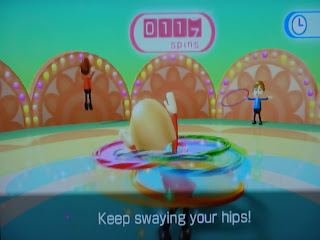 Sometimes I think my Christian walk is a bit like Super Hula Hooping. I do particular things for a reason, but to the rest of the world, my actions and choices are incomprehensible because their eyes aren’t focused on the same thing mine are focused on: doing Jesus' will. And sometimes the world isn't shy about letting me know how it sees me.
Do you ever feel like you don’t fit into the world? Boy, I do. I’ve been laughed at, avoided, and debased for my belief in Jesus. Rejection is painful, but as Christians, we understand that we aren't supposed to fit into the world, that God calls us to act differently than the world does, to walk in the light and to shine like stars in a dark universe. How we shine is different for each of us because God’s call to each of us is unique, but no matter what task He's given us or what suffering He allows us to endure, Jesus knows exactly where we are and how we feel.

His words are comforting: “If the world hates you, keep in mind that it hated me first. If you belonged to the world, it would love you as its own. As it is, you do not belong to the world, but I have chosen you out of the world. That is why the world hates you.” John 15:18-19
How blessed it is to know that Jesus has been where we are and understands our feelings! God sent us a Counselor, too, to comfort and strengthen us when we feel estranged. He’s also sent us each other, to shore each other up in the faith. Seeing as Monday was the Feast of All Saints, I thought it appropriate to share a few examples of Christians who, in their time on earth, perhaps looked odd to the rest of the world, but shone like stars, keeping their eyes on the prize.

St. Francis of Assisi (d. 1226) is well-known for his love for animals. But he was once a man of wealth who gave away everything for the sake of the Gospel. His new lifestyle embarrassed his family and lifted a lot of brows in Assisi.

Damien de Veuster (1840-1889) felt called to serve lepers on the Hawaiian island of Molokai. People were baffled by his choice, insisting his contact with lepers would be the death of him. It ultimately was, but first, many lepers were not only blessed, but saved.

Image via Wikipedia
As daughter of a Carthage nobleman, Perpetua (d. @200) shamed her family by believing in Jesus. She could have escaped martyrdom –and lived to raise her son – if she’d renounced Christianity, but she yearned to serve Jesus, even if it cost her life. Her death in the arena inspired Tertullian to write, “The blood of the martyrs is the seed of the church.”

Captives in Babylon, Meshach, Shadrach and Abednego stood out in their culture because they wouldn’t eat King Nebuchadnezzar’s food. Then they refused to worship his gods. About to be thrown into a fiery furnace as punishment (Dan. 3), they insisted to their enraged king, “the God we serve is able to save us from it….But even if he does not, we want you to know, O king, that we will not serve your gods…”

God did save Meshach, Shadrach and Abednego. And He has the power to save us today from whatever troubles us. Following in His will, however, isn’t always easy, but it’s the best way. Tomorrow when I get back to my Super Hula Hoop, I'll be glad no one can see me wiggle my hips...but I'll also pray for strength to shine when the world's eyes are on me. I hope I won't be giving the world's judgment of me much thought, however. I plan to keep focusing on Jesus instead of the eyes of those around me.

Serious Question: Do you ever feel like you stand out because of your faith?
Silly Question: What’s your favorite form of exercise?