I guess I’m exaggerating though, because my coins aren’t from the year 30 AD thereabouts. Near as I can figure, they’re about 300 yrs after Jesus died.
If you’ve read my previous posts, you’ll know I’m a coin collector, a pathological photographer, a rock hound which may or may not include fossil finder depending on how you look at it. And from my last 2 posts, you know I like biblical fiction. Lump those interests together, and you end up with the fascinating hobby of ‘Uncleaned Ancient Coins’.
The spell-check on my computer has added a little red line under the word ‘uncleaned’. I don’t understand why it won’t accept the word – eBay uses it. And yes, that’s where I bought my first 3 uncleaned ancient coins.


The story is quite funny. About a dozen years ago, I was browsing the coins on eBay and saw an item for 3 uncleaned ancient coins for what amounted to about $2 apiece. The shipping doubled the price. But the whole concept of ‘buried treasure’ intrigued me. Obviously, it still does.
When I received those first 3 coins and held them in my palm for the first time, the wonder struck. They were as they claimed to be – uncleaned. That is to say, they’d been buried for 2,000 years and were dirt-encrusted. We’re talking a heavy concentration of dirt here. Packed solid. These types of coins are found during excavations all over what was then the Roman Empire. Sometimes they’re unearthed in a broken clay jar. Or found hidden in a wall. Or dug up from where someone hid it in a hole and didn’t go back for it.

﻿ ﻿﻿﻿
﻿﻿﻿
﻿Along with the coins, I received instructions on how to clean them. Some dealers advocate brushes and picks and whatnot, but that can ruin the beauty instead of bringing it out. At the time, I remember being scared I’d ruin them. So, I did what every woman does when faced with something she doesn’t want to lose but needs to set aside – I put them away in a safe place.


Then, we moved to the farm. And somehow in all my boxes of fabric and books, I lost my 3 little uncleaned ancient coins.
A few years ago, an expert on ancient coins spoke at my son’s CoinHawk meeting, handed out a cleaned ancient coin to each junior member, and then went back to Edmonton, Alberta.
At the next coin show and sale, I noticed a dealer - from our very own senior coin club – selling ancients. He had plastic Tupperware filled with ancient coins. I stopped to talk and mentioned my ‘lost’ ancients. He laughed. He also said he gets his from a relative in Britain who is in the building construction industry. The coins are unearthed in the course of his work and he sells them to his relative here.
I bought some from him at very reasonable prices – 6 for $10 and no shipping fees. And then I bought 3 larger, better quality ones at a slightly higher rate, and he tossed one in for free. All told, I received 11 for under $20. (As opposed to the eBay purchase of 3 for $12.) Now, I’m not knocking eBay because I’m always buying from there, I’m just telling you my story. In fact, I have 6 Greek ancients from eBay soaking in oil right now.


You see, that’s the correct way to clean them . . . soak them in oil. Sometimes for years. That’s the instructions I received from my coin club buddy. Cover the ancients with oil and place in a warm place, like on top of your fridge for a couple months. Then you use Q-tips to rub the dirt off. Lots of elbow grease. The lighter the oil, the faster the oil will heat, and the better it will work. He suggested olive oil. Yikes! Since I can’t afford that, I use a product just new to our stores in the past year – PurOliva – a blend of extra-virgin olive oil and canola oil. Or, I’ll use oil that’s past its prime. Much better than throwing it out.
The coins I’m showing you here have been soaking for 2 years. The photos on the left were taken in 2008 after their first cleaning. Yes, I should've taken the photo before I put them to soak, but I was eager to give them their bath.  On the right are the same coins as of last night after their 6th cleaning. I don’t have a lot of information on them because I’m not an expert and it takes time to peruse all the books or surf the net on ancient coinage. And truthfully, I’d rather be writing.

This a hobby my son and I can do together, especially while we're sitting in front of the TV. It keeps our hands busy instead of reaching for the munchies. 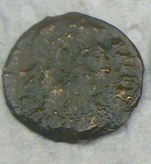 From the hair adornment, I'm guessing this is from the 4th century, but I'm not sure exactly when or who it is. I like the bronze color coming through.

At the time I received this set, both sides were smooth and had the feel and size of a Sweet Tart. They almost look the same, but the patina is fading from the one on the right. Not much progress for 2 yrs of soaking and 6 cleanings. However, I've found that some coins are slow to start - especially these Sweet Tart ones that had were hard-packed. The reverse of this coin is next.

This is the reverse of the one above it. If you look close, you can see a man riding a horse. I'm excited to see this one after the 2000 yr old dirt comes off. And remember, I'm just using oil and a Q-tip to lightly rub the dirt away.

This was another 'Sweet Tart' coin. It was a nice surprise because at the first cleaning - on the left - a big chunk came out of the hole. You can see how much cruddy build-up is there. Again, it's taking time to clean, but it's getting done. 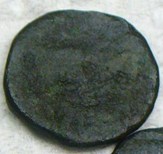 This is the reverse of the one above it - not much happening on this side, except again, the smooth 'Sweet Tart' feel is gone.

I'm not sure I like this one. I've read how the Romans glorified acts of violence on their enemies by eternalizing it on their coins. You can't see it on the left, but the cleaner coin on the ride definitely looks like he's holding up a child or small person. Some of their coins showed soldiers holding the hand to guide a child, but it looks like both hands of the smaller person are down. I don't know...what do you think? 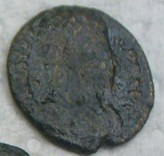 This is the obverse of the one above. With the detail showing up on the cleaner coin on the right, I'm wondering if this may be a woman. I can make out the baubles the men wore on at the end of their wreath or whatever their hair﻿ band is called, but I couldn't find the photo anywhere. Also, the hair comes down to the shoulder in a thick swath. And finally, the word on the right only seems to have 5 letters which is usual for the wife of a cesaer of emporer. The men tended to have way longer names and information about themselves. 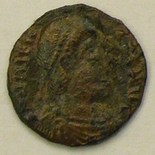 Most of the progress on this one is on his face. I can now make out his ear, eye and mouth. The bronze color is coming through nicely, too although not as much as the photo implies. 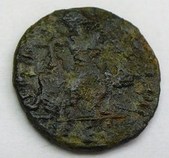 This is the reverse of the one above. Again, it looks like the person/deity/soldier in this coin is holding a child again, but from a different angle of the actual coin, it could just be the top of a banner that makes it look that way. Hopefully, I can tell on my next cleaning.

It was nice to finally see the image on this one coming through. You can see on the one of the right where the warm oil was cracking the surface. 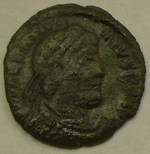 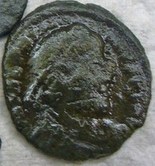 The shiny one is still wet with oil. The dirt is coming off the face, neck and words nicely. However, I'm concerned about that line from his mouth. It may be a crack in the dirt, but I'm beginning to think it's a gash right on the coin.

And that's all I'm going to show you this time around.

One thing I wanted to say... forgeries and fakes are abundant in this business. That's why I'd rather buy the cheap uncleaned coins and do the work myself. The dealers generally know what the coin's content is even if they can't see it. How - I don't know, but they do. I know when I see a bronze or copper coin, but I have a hard time even distinguishing between the two.

Also, because these are cheap coins, I'm not in any danger of upsetting some foreign Board of Antiquities or something.

Oh - I found my 3 little original eBay coins a couple months ago. And they're sitting in oil now. If there's any interest, I'll let everyone know how the coins turn out.
So, what do you think?
www.anitamaedraper.com
Posted by Anita Mae Draper at November 02, 2010