by Gina Welborn
Niki's post on Saturday about Harry Potter books and the Lord of the Rings got me thinking.

See, there was this Facebook status thread last week about BBC's 100 Books You Ought to Read. (I've read--or partially--read 22 of the 100.)  Included in that list were the Harry Potter series and LotR. Now I read Harry Book 1 years ago. Loved it. But didn't read any others because hubby asked me not to because he didn't want the kids reading them. I was fine with that.

Then sometime after Harry began LotR movie 1 was released. My oldest son eventually decided to read the LotR series. He'd left book 3 at home one day so I decided to read it. Well, I *tried* reading Return of the King. Eventually I skipped the pages and pages of narrative to find dialogue scenes.
Yes, I'll freely confess: For me, the LotR movies are far better than the books.
As far as Chronicles of Narnia (also on the 100 books list), I haven't read any of them either. Maybe I will since I'm determined now to read more of those books on that list. Except Anna Karania. I have it on my book shelf not because I want to read it, but because I want people to see it on my shelf and *think* I read it. Maybe someday I'll read it. Maybe.

Probably not.
Anyhoo, about a week and a half ago, hubby and I drove up to Washington, D.C., for a free advanced screening of THE CHRONICLES OF NARNIA: THE VOYAGE OF THE DAWN TREADER. Since the movie wasn't a finished version, I can't give a review (as legally stated by the VP of Walden Media). They were still finishing the CGI work. Pretty sure it was on the Sea Monster battle at the end of the movie. Then again, I'm not positive that they were finished with the mermaids, which were cool looking even if they were finished.

Still, I enjoyed the movie and am greatly looking forward to taking four of my five kids to see it during the Christmas break, unless we can't wait for later in the month. It opens December 10th.

After the movie was over, the representatives from Walden Media gave us a questionairre about the movie to help them with final edits and whatnot. One of the questions was "Did the movie answer all your questions, or if not, what didn't it answer?"

My answer: "Did King Caspian ever find a queen?"

I then shared my question with my hubby and explained my reasoning as "I just asked what everyone else was wondering but felt stupid asking."

The lady sitting next to me said, "I was wondering the same thing!"

The lady sitting in front of me turned around. "I wasn't because that information wasn't in the book."

Her hubby added (rather snidely, IMHO): "C.S. Lewis didn't care about that stuff."

Now a wiser person would have smiled and said nothing. Before hubby could clamp his hand over my mouth, I looked at the couple sitting in front  of me, smiled, and said, "Well, this just proves that C.S. Lewis wasn't the perfect writer."

I don't think I made a new set of friends. Still, hubby walked next to me as we left the theatre. 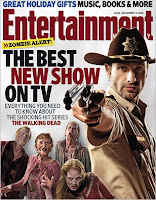 One of my favorite aspects of the holiday season (Thanksgiving thru New Year's Day) is the arrival of blockbuster movies. Event movies. Family movies. Or, as I read in this week's Entertainment Weekly, "an extraordinary out-of-home experience."

Movie attendance so far this year is down 2.1 percent from last year. How many times this year have you said, "______ looks like a good movie, but I'll wait until it comes out on DVD"? Umm, I've said it a good number of times...although my movie theatre viewing this summer was at a record high since we have a drive-in-theatre where an adult can see two new (or mostly new) releases for $7.

Harry Potter and the Deathly Hallows--Part 1 has now earned $220.4 million in 10 days, which is the tenth-best 10-day tally on record. Guess not too many people decided they'd wait until it comes out on DVD.


What 2010 holiday-season movie are you most anticipating seeing and why? And if it's not on this list, what is it? (Click on the title for a link to a trailer and more information about the movie.)
The Nutcracker in 3D (Elle Fanning)
Harry Potter and the Deathly Hallows--Part 1
Tangled (Mandy Moore)
The King's Speech (Colin Firth)
Black Swan (Natalie Portman)
Chronicles of Narnia: Voyage of the Dawn Treader
The Fighter (Mark Walberg/Christian Bale)
The Tourist (Angelina Jolie/Johnny Depp)

Up next for me is going with oldest son to see TRON: Legacy. However, my "Will Wait for DVD" list definitely includes The King's Speech,The Tourist, The Tempest, The Nutcracker, and True Grit. Nice variety there!
So what about you? Have you seen Harry Potter yet? Or Tangled? Liked it? Loved it? Wished you'd waited for the DVD?
Posted by Unknown at November 29, 2010