All the Christmas News That’s Fit to Print

There’s nothing like walking to the mailbox on a crisp December afternoon. 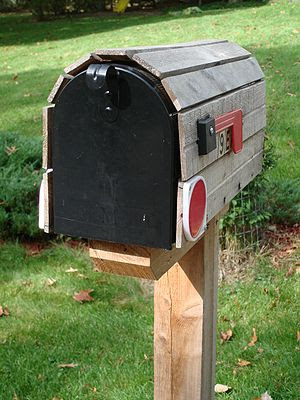 Image via Wikipedia
Perhaps it’s because I’ve moved so many times and I miss so many people who live in other towns and states. But to me, a mailbox stuffed with colored envelopes (and perhaps even a package or two) is a hopeful thing, a message that I am remembered and wished good cheer by someone I care about.

Or maybe some folks just haven’t updated their labels and keep forgetting to take me off their Christmas card lists. In any case, I love Christmas cards. Well, most of them. Not so much the ones from certain businesses and services we use, which picture the office staff living La Vida Loca. But mostly, I love the cards I receive. I love the photo cards, which show how much the sender’s kids have grown, and I love the standard kind of cards, with artwork reflective of the sender’s tastes: angels or Santa or dark, starry nights looming over the silhouettes of magi.

Image via Wikipedia
True, many of us exchange cards with people we may rather not keep up with, and yes, greeting cards are a multi-million dollar industry. Cards cost money, use up trees, and can be a huge task to complete when we're harried with dozens of other jobs this hectic time of year. Nevertheless, Christmas cards are, to me, a tether to a friend, a peek at the sender’s tastes and personality, and a reminder of who they are and how I feel about them.

For this reason, I also like Christmas newsletters, those mass-produced sheets describing what the author has been up to for the past year. Some people – almost 50% of us, by one estimate – hate these letters, and I can see that viewpoint. Newsletters are impersonal, and sometimes inappropriate or braggy (at least, some of the ones I’ve received have been). But no matter what is included in the letter, I think they often reveal the heart of the writer, shedding light on his or her treasure, whether it’s pets or travel or sports or politics. On the afternoons where I receive a scrap of Christmassy stationery tucked into a card, I sit down with my cup of hot chocolate (with a candy cane for a swizzle stick) and get lost in the swirl of the relationship I have with the letter-writer.

There’s etiquette on Christmas letters, of course. Emily Post (click here) says our letters should fit on one page and should neither boast about our family’s accomplishments nor bemoan our difficulties. They should be concise, cheerful, and focus on our highlights. And it doesn’t hurt if there’s a personal message added by hand at the beginning or end.

When done well, these letters can be true jewels. And I don’t mean 90-seconds of reading escape, but treasures that make us feel connected to each other from across the miles and fill us in on what we’ve missed.

One year, my friend Leslie sent a hilarious poem to describe her family’s activities over the past twelve months, from her husband’s fateful deer hunting trip to the kids’ performances in the Nutcracker. For the past few years, my friend Arlena includes a timeline of the past year in her cards, highlighting her family's milestones in snippets that pack a punch. Jeanie wrote last year about the places she’s visited and how she saw God at work from Bethlehem to Sweden. They were all different sorts of newsletters, each as enjoyable and unique as their authors, and each conveyed the events I’d missed in such a way that I felt like my friend was right there with me, sharing a cup of cocoa and giving me an update on her life.

In the age of Facebook and Twitter, holiday newsletters may dwindle in popularity, just as e-cards have replaced their paper counterparts in the hearts of some of my friends. But I’m a paper-type gal, with my books as well as my Christmas cards, and I like to get the full scoop with something I can hold and view again later in the light of the Christmas tree, when I need a fix of a far-away friend.

What do your Christmas cards look like this year? Do you send a letter out with them?