Christmas is a wonderful time of year when we celebrate the birth of Christ by sharing time, food and gifts with loved ones. But what if you don’t have any loved ones? Perhaps you’re a loner who doesn’t feel comfortable around people. Or maybe you had loved ones but lost them somehow.

The concept of this story came when I thought of miracles happening to people who don't have loved ones to share the Christmas season.


The Shepherd
by Anita Mae Draper
“Maybe I won’t feel a thing,” Sarah whispered. Entombed in a world of white, whirling snow, she leaned back against the headrest and closed her eyes. Just minutes before she’d turned off the ignition to her Ford Focus after it slid down an embankment into a snow-filled ditch. Already the bitter cold filled the interior of her small car.

It was a fitting end on this Christmas Eve. Exactly four years ago, she’d fallen into a world of living hell. And now, finally, it looked like her dark time was ending and peace, blessed peace, awaited.

The howling wind rocked the Focus. She closed her eyes. Maybe she could fall asleep before her body numbed from the frigid cold. Her mind skipped back over the past years of misery to a time of laughter with Mike and the kids. Memories of their last Christmas together swirled in her head much like the snow danced around her vehicle. They’d been so happy. The kids had coerced them into opening a gift each before they left for the Christmas Eve candlelight service. She’d cried when she opened the twin’s badly-wrapped package and seen the locket with their similar photos. Within minutes, Mike had fastened it at her nape.

She breathed in the freezing air. It hit the back of her throat and she coughed in protest. The movement jiggled the locket nestled against her skin. More memories assailed her. They’d sang carols on the way to the service, at the service, and on the way home—stopping mid-tune when their car hit the patch of black ice. Suddenly they were going sideways on the wrong side of the highway while large white lights bore down on them. She screamed, waiting for the impact of fifty thousand pounds of metal and glass to plow into them once again—her never-ending nightmare.

Rap, rap, rap. Metal groaned in the thundering silence and a tempestuous wind blew in. Her eyes flew open. She gasped as frigid air clamped onto her eyeballs. Tears flooded her eyes, lessened the pain.

Sarah stared at the man. Only his eyes were visible through the balaclava that covered his skin.

“Come on, let’s get you out of here,” he shouted over the wind.

He helped her move cautiously as if aware of her numb limbs. A roar reached her ears overpowering the howling wind and she noticed a huge farm tractor idling several feet away. But the man didn’t lead her to the cab. Instead, he guided her behind it to a looming trailer. “It’s the best I can do under the circumstances,” he yelled above the noise. He pulled open a small door and practically pushed her inside. “At least you’ll be warmer in here. Hang on and we’ll be home, soon.”

The door creaked and clanged behind her.

Sarah couldn’t see a thing. She blinked. Her eyes were open, but blackness surrounded her. And, something else. Something or someone shared the space with her. She sucked in a breath and gagged.

The tractor roared and the trailer lurched forward.

Off balance, she fell sideways against a mound of...something. It baa’d and moved.

“Eek!” She jumped away, slipped, and dropped to the straw-covered floor. The scent of manure assailed her. Stuck in a trailer with a bunch of smelly sheep. Could it get any worse? An image of sitting in her cold car flashed. Yes. Yes, it could. She sat, waited and listened to the animal sounds on the other side of the trailer. Apparently, the sheep were just as wary of her as she was of them.

When the tractor stopped a few minutes later, Sarah stood waiting by the door. It opened and she stepped forward.

A sheep sprang through the opening pushing her aside. The door slammed shut behind it. By the time she’d gathered her wits, the trailer jerked forward again. Over the next couple hours, the same scenario was repeated. After a while Sarah sank into a corner and tried to ignore the animals who shared her space.

Someone shook her shoulder and she became aware of a man bending over her. Disoriented, she shirked until his voice nudged her memory.

“Hey, I’m not going to hurt you. I promise. Now come in and get warm.”

Outside, the wind hurled shards of ice at her face. She turned, her forehead bumping his shoulder. He lifted her, ignored her protests, and carried her the twenty feet to the stairs of a small cottage. Putting her down before a heavy wood door, he flicked the latch and warmth flooded out to greet her.

“Make yourself comfy. I’ll be back soon.” 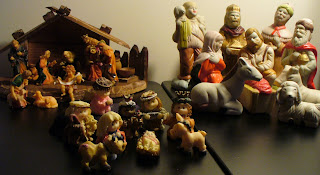 His soothing words flowed over her like honey—a feeling she hadn’t felt in a long time. She glanced around the room in wonderment. Every table and shelf surface held nativity sets. Different sizes. Different textures. Different sheep. Sheep? Yup, sheep were everywhere.

A large painting caught her eye. The bearded, long-haired man was the same one portrayed on church buildings in the neighborhood. And he was carrying a sheep. Well, technically it was a lamb, but sheep gathered around his sandaled feet.

She hobbled to the nearest chair and dropped into it, facing the painting. It certainly went with the décor. Long minutes passed while she stared at the painting. The man had a certain look to him. Gentle and peaceful. As if everything was going to be all right.

Her rescuer emerged through a door across the room.

“I’m Jake Edwards. Here, this should warm you up.” He offered her a steaming mug.

Sarah took it and thanked him. He wore a woolen sweater with a Christmas motif which would have seemed ludicrous on any other man, but somehow it suited him. He smiled with his eyes, laugh lines crinkling at the corners. His whole package oozed comfort.

“Sarah Wheeler. Where am I?”

He sank onto the sofa near her. “You’re at The Manger.”

“The Manger?” she scoffed.

“Yessirree. I’m a shepherd and The Manger is my farm. The storm caught me by surprise and I was out gathering the last of my flock when I saw your car.” He gestured to her and winced. “Sorry.”

She glanced down. Her clothes were decorated with bits of golden straw and brown smudges. “Eeewh!”

He threw back his head and let out a hearty laugh.

It warmed her from the inside out. “Sure, you can laugh. You’re not the one wearing the manure.”

“My mama raised me to share my things. What’s mine is yours.”

“Yeah, well you can keep it.” She smiled to offset the words.

He laughed harder, wiping his eyes. Several minutes later, he took a long drink from his mug and set it down. “Did you need to borrow my phone? I’m sure there’s someone wondering what happened to you.”

She swirled the coffee around in her mug. “No, there’s no one. I’m all alone in the world.” The minute she’d said the words she cringed. What a stupid thing to say to a stranger.

She lifted her head at his soft tone.

He appeared to be gazing at the painting of the shepherd. “I lost my fiancée a long time ago. I don’t know how I would have gone on if I didn’t know she was in heaven.”

Sarah leaned forward. “What do you mean—in heaven? And what does the shepherd have to do with anything?”

A smile curved up the corners of his mouth displaying a dimple. “Do you know why everyone makes such a big deal about Christmas?” 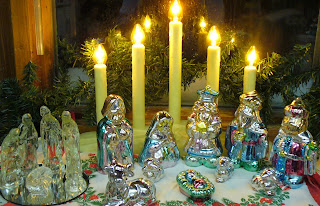 “Sure, everyone knows that. A baby was born two thousand years ago. I think he was a king or something.” She should know . . . they sang enough songs about him.

He nodded to the painting. “You’re right. He was a king. Would you like to hear more about him?”

“Him? The shepherd or the king?”

“Both,” he said. “First, we’ll see if we can find you some clean clothes. Then over supper I’ll tell you all about a very special Man.”


From my house to yours, have a very Merry Christmas and a blessed New Year.
Posted by Anita Mae Draper at December 22, 2010