The Hugeness of God

I recently attended a new Bible study class about the "hugeness" of God.

There is so much that could be done with the concept of God's hugeness; so many lessons that could be taught. But the first class in this study went in a direction I could never have imagined.

Even now, week's later, I'm still filled with wonder as I think about it.

It was amazing, delightful, and almost overwhelming. I was awestruck as I watched a demonstration of just how big God really is.

We watched a DVD filled with pictures taken by the Hubble telescope. I'd seen a couple of them before. But most were new to me. There were galaxies I'd never heard of. These two, millions of light years away, were my favorites.

I always knew the universe was big. But I was struck anew at just how huge this universe, called into being by God, really is.

We were asked to write down our immediate reaction after watching the film. My reaction surprised me. After watching this, I should feel incredibly small. But I didn't feel that way at all. Instead, I wrote, "I feel so loved." It was chilly in the room that night, but as I wrote those words a warm feeling encompassed me.

As I've thought back over those amazing pictures taken in the huge expanse that is space, I thought about God and what his purpose was in creating the universe. Could it simply be about showing us the wonders he's capable of? About showing us his power? Maybe.

But then I had another thought. Maybe he wanted to show us that, in spite of how huge he is, God loves us as unique individuals. We're not just minute specks on a blip in this incredible universe. We are loved and adored by the very one capable of breathing all of this into being.

Imagine this. God knew us before we were even born. He knows our names, our thoughts, our hurts, and our laughter. In a universe so large, with so much happening every second, he never forgets about us. He still hears my prayers. He still gives me peace and comfort.

This is a picture of the center of the Whirlpool Galaxy, over twenty milllion light years away: 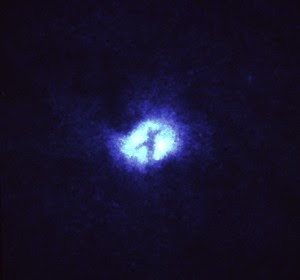