Sometime in the next two weeks, I hope you take time to read the real Christmas story. In Luke’s gospel, Chapter 1, the archangel Gabriel visits a young girl named Mary. From this account, Gabriel greets her as ‘highly favored one’. Regardless of how much we like to hear good news and kudos such as this, Mary could not have been anything but shocked. An angel? Despite popular culture, Angels are not like glowing humans, but amazing creatures built for worship and warfare. More Vin Diesel than Shirley Temple.

Mary was troubled all right, and Gabriel was quick to reassure. Don’t be afraid. For you have found favor with God. I don’t think he repeated himself for amusement--though we often find ourselves doing this with teenagers--but simply to reassure her. For what he was about to tell her, she needed this boost of encouragement.

How many times in her later life did Mary recall that introduction and the words that followed? Every sentence that came from Gabriel’s mouth would have seemed wilder than the last.

Behold, you will conceive in your womb and bring forth a son and call His name Jesus.

He will be great and will be called the Son of the Most High!

The Lord God will give Him the throne of his father David and He will reign over the house of Jacob forever.

There will be no end to His kingdom.

You may consider her response a challenge or a statement. It didn’t matter.

Somehow in those few moments, facing this supernatural messenger and the words that would change her world, and ours, forever, Mary took the step of mature faith few of us can even comprehend.
“Behold, the handmaid of the Lord; Be it to me according to your word.”
Handmaid is a nice term for a young female helper. Sounds so sweet, doesn’t it? But the original text read DOULOS (Greek) used elsewhere as BONDSERVANT. Not hired help, but more like slave. Mary wasn’t just saying she agreed to be a demure servant for awhile. She was signing her life over.

A purchased servant was to serve you six years. The seventh year, you set him or her free, supplying the servant with goods enough to start a new life. However, per Deuteronomy 15--The Law Concerning Bondservants:

Verses 16 and 17 And if it happens that he says to you, ‘I will not go away from you,’ because he loves you and your house, since he prospers with you, then you shall take an awl and thrust it through his ear to the door, and he shall be your servant forever. Also to your female servant (aka handmaiden) you shall do likewise. 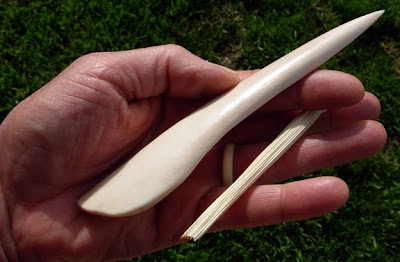 That’s serious business. That’s willingly becoming a slave to the household because of the love and respect the bondservant had for his or her master. Symbolically, they ‘weren’t going anywhere’ by being attached, literally, to the house! I read that a bondservant often wore an earring in that ‘piercing’ as a symbol of their loyalty. A loyalty so strong, they were treated in return as more family than servant.

Sometimes I could use that awl in the ear to keep my wandering to a minimum.

If Mary hesitated during Gabriel’s visit, we don’t know, but it didn’t last long. Paul, Timothy, Peter, Jude and James gladly took the title also. Bondservant. By choice. Purchased and free to leave. Staying out of love because they’d had personal encounters with the ultimate bondservant, Mary’s son, the Son of the Most High, who came down from glory to be servant to all, even serving up his body, likewise nailed to wood.

To serve, we put aside our desires for the sake of others. Our time, our wants, our motives become secondary to others. Is that easy to do? No. Not for me and certainly not for long.
Service is difficult, for we are selfish creatures. Nonetheless, we are called to serve. Willingly as Mary, or unwillingly, it will happen. Serving is easier when we love someone, especially someone who loves us so much. Would you gladly serve someone who saved your life? Well, serving God for us, means serving others just as we would God.


"Lord, like the Hebrew bondservants, help me recognize and remember the blessings I have in you. Fasten me to your house, Father God, if that’s what it takes. Turn me around, guide me, draw me close. Soften me and remind me of your unbelievable love, Lord, so that like Mary, I willingly choose service to you and for you. Teach me to be your Bondservant. I don’t have anywhere else I want to go. “I will not go away from you.”
Posted by Debra E. Marvin at December 12, 2010