THE HEART'S APPEAL by Jennifer Delemere, Review by Rebecca Maney

"She'd had an air of confidence and independence . . . Her unadorned clothing had only accentuated, rather than minimized how attractive she was." 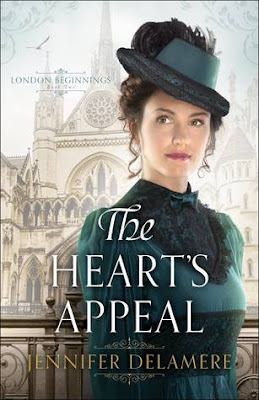 A first impression of the woman who had ended up saving Michael Stephenson's life following an unfortunate accident on the Metropolitan Underground Railway. Her quick thinking and calm demeanor would leave him with merely a scar; and a distinct feeling that he would enjoy seeing this woman again, if only to determine why she would ever want to become a doctor.

Julia Bernay will not be dissuaded from her life's calling, to become a physician and travel to Africa as a medical missionary. First things first; she must pass the entrance exam into the only London institution training female medical students; the London School of Medicine for Women. Latin has managed to be her Achilles heel, so when she visits the young aspiring solicitor whose life she saved on the train, she accepts a gift; a gift of Latin tutelage. If only Michael Stephenson wasn't on the legal team trying to shut down the very program that would ensure her future.

Life becomes complicated as Julia's faith and determination becomes a curious anomaly to an aspiring lawyer, who has considered sacrificing his own future happiness in order to elevate his family's name into good stead again among London's social elite. Not to mention, that a powerful earl will stop at nothing to thwart Julia's dream. . . . . ."Solvitur ambulando - It is solved by walking."

What a lovely story, with its impressive mix of history and story line, unique and endearing characters, and a deep, authentic inspirational undercurrent.

BACK COVER BLURB:
Strong-minded and independent Julia Bernay comes to London to study medicine and become a doctor--a profession that has only just opened up to women. She witnesses a serious accident, and through her quick actions saves the life of an ambitious young barrister named Michael Stephenson.

Coming from a family that long ago lost its money and its respectability, Michael Stephenson has achieved what many would have thought was impossible. Hard work and an aptitude for the law have enabled him to rise above his family's stigma and set him on the path to wealth and recognition. But his well-laid plans are upended when the accident brings Julia into his life.

Michael soon discovers he's met a woman every bit as stubborn and determined to make her mark on the world as he is. Sparks fly--but will they find common ground?

I purchased this book and this is my honest opinion.
Posted by Debra E. Marvin at May 05, 2018