When I set out to jot down a blog post about the Greville Emerald Kokoshnik Tiara that Princess Eugenie wore at her wedding last Friday to Jack Brooksbank, I thought I wouldn't have a problem finding oodles of historical photos of the piece to share. A quick google search would be required--with one caveat. The photos would have to be labeled for reuse, of course. Royalty-free.

I can't find one photo from Eugenie's big day that I can share without fearing the Photo Police will come calling...nor can I find one photo of the tiara, which is almost a hundred years old. Why the lack of available historical photos of it?

Here's why: The Greville Emerald Kokoshnik Tiara hasn't been seen in over 75 years. In fact, some people weren't sure the diamond and emerald stunner actually existed until Princess Eugenie wore it at her wedding.

Let's delve into its history!

The tiara, also known as the Greville tiara, was crafted by a Parisian jewelry house, Boucheron, for Dame Margaret Greville in 1919.
Greville was a close friend of the royal family, and she gave the tiara to Elizabeth, the Queen Consort (or the Queen Mother, as many of us know her) in 1942. In fact, she gave over sixty pieces of her large and valuable collection of jewelry to the Queen Mother. Many of the pieces have never been seen.
We (meaning: the world) know this particular tiara existed because there was a photo of it in a book called Boucheron: The Secret Archives by Vincent Meylan. But we (meaning: the world) have never seen it worn by a member of the royal family. Apparently, Greville was known to change her jewelry, and it was possible she used the stones for other items.

That didn't happen here, and clearly the tiara was inherited by Queen Elizabeth II when her mother passed away in 2002. The Queen graciously loaned it to her granddaughter, Princess Eugenie, for her wedding!
The tiara is comprised of brilliant and rose-cut diamonds set in platinum, with a central emerald (93 carats!) and smaller emeralds on the sides. Kokoshnik refers to the style, which was made popular in the Russian imperial court.

While many suspected Eugenie would wear the York Tiara, like her mother wore, she chose this stunning piece instead. She also decided to forego a veil, perhaps to reveal the scar she received from scoliosis surgery when she was 12.

To see fifty photos of the wedding, the tiara, and all the fun, click People magazine, here.

What did you think of the Greville tiara?

Susanne Dietze has been a Royal Wedding Watcher since she was a kid and Diana Spencer married Prince Charles. Her novel The Reluctant Guardian just won the Book Buyer's Best Contest for Best Inspirational Romance. 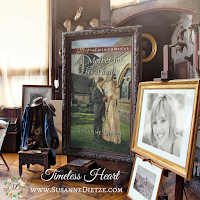