ETERNITY BETWEEN US by Stephenia H. McGee, Reviewed by Paula Shreckhise

Eternity Between Us by Stephenia McGee is a top notch historical book set during the Civil War.

This book focuses on a Southern girl, born and bred, and a Northern man at the end of his medical studies. Can the gulf between them be crossed?

Evelyn Mapleton is beholden to her Aunt and cousin while her father is away reporting on the war. They have no real fondness for her, she is more of an obligation to them. She is outspoken about her support of the South and intends to help in some way. 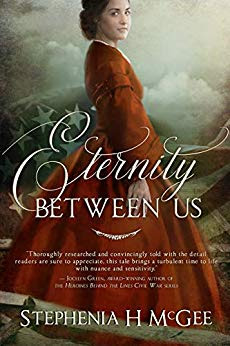 Samuel Flynn, a Yankee, has one desire: to finish his practical requirements under his Mentor, Dr. Porter, and go back home to help his father in his medical practice. His job for the foreseeable future is to tend to the broken soldiers at a field hospital near Washington D.C.

This book has a different slant of usual Civil War stories. The reasons for loyalty to one side or the other is not so clear cut. It shows the everyday problems that occur when war rears its ugly head.

Stephenia writes a very detailed account of certain happenings. She has researched well and tells us of women spies and how they helped their chosen side.

Each of the main characters has a strong faith in God and staunch reasons why they believe as they do. But they can always be led by the Spirit of God. God comes through and keeps them and shows them the best way to resolve their differences and carry on.

The author’s lyrical prose and characterization is a joy to read. And there were a few surprises just to keep the reader on his toes! Stephenia McGee is fast becoming a favorite author!

I recommend this book to fans of Civil War stories. You will not be disappointed!

*I was given an ebook ARC of this novel by the author. I was not required to give favorable review. All opinions are my own.

After being forced to use a pistol against invaders, Evelyn Mapleton is no longer the timid girl her extended family expects. The more her aunt and cousin resent her new independence, the more Evelyn is determined she'll make her missing father proud by taking up his cause and aiding Confederate soldiers--even if she has to outmaneuver the Yankees guarding her home to do it.

Samuel Flynn's life is consumed with two priorities: learning to become a proper guardian for the young orphans he's adopted and obtaining his physicians license. When his final testing sends him to a Federal Army field hospital, the last thing he expects is to be entranced by a mysterious woman.

But when Evelyn's misguided exploits put her life in danger, will he risk everything he's worked for to save a woman he thinks is his enemy?

Based on first-hand accounts from the Civil War and with a strong romantic thread, this is a tale of faith, espionage, hope, and courage historical fiction fans won't want to miss.

Available as paperback and digital ebook:
Buy Eternity Between Us at Amazon