ALL MADE UP by Kara Isaac, Reviewed by Karen Klepsteen

If you’re a fan of The Bachelor/Bachelorette (and even if you’re not), you’ll love All Made Up! In the beginning of the story you’re immediately drawn into the production of reality television when Katriona is asked to fill in as a last-second replacement on Australia’s latest dating show, Falling for the Farmer. Unbeknownst to her, the single farmer chosen to compete this season is her ex-boyfriend Caleb, the only man that she’s ever loved. A very reluctant participant, he’s only there to make his ailing mother happy. 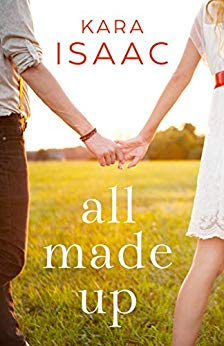 As is the case with all dating shows, drama and hilarity ensue as the ladies compete for Caleb’s affection. Kara Isaac does such a fantastic job of portraying the ridiculously unromantic aspects of filming reality television! I was cracking up at some of Caleb’s and Kat’s interactions and their ability to keep the filming crew on their toes. At the same time, there are some very serious issues that Kat and Caleb must overcome in order to move beyond their pasts and into a future together. This story has just the right weight given to each situation, and I laughed and mourned right along with Kat and Caleb! Even if you don’t love dating shows, you’ll find yourself rooting for them to get the happy ending that they so deserve!
*I received a complimentary copy of this book from the author and am under no obligation to post a positive review. All opinions are my own.

Everyone thinks Katriona McLeod is living the dream. Her professional career as a make up artist sees her traveling the world working with the stars and she's got no shortage of men wanting her affection. Only problem is she's never gotten over Caleb Murphy, the one guy she's ever loved. When she accepts a job on the latest looking-for-love reality TV show, Falling for the Farmer, she discovers to her horror that Caleb is the leading man and she's cast as one of his harem. But she hides a secret that means that even if she wanted a second chance with the guy who broke her heart she could never have it.

Caleb Murphy couldn't care less about C-Class celebrity fame or reality TV and he certainly doesn't believe it could lead him to love. The one thing he does care about is fulfilling his mother's last wish. Kat's presence on the show seems to offer up a solution that will make both the network and his mother happy. It might have been almost ten years since they split but he knows he can trust her with his plan. Just as long as he doesn't fall in love all over again with the woman who will never stay.

Available in paperback and digital Ebook:
Buy All Made Up at Amazon