A remote monastery in the Middle East.
Murders of innocent people.
Mysterious candles.
A dead terrorist.
How did they all connect? 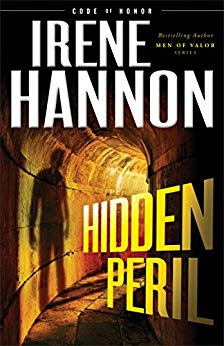 Hannon neatly ties these elements together while writing an engaging and thrilling pulse-pounding suspense. For me, she's one of those authors who I'll follow anywhere she leads! Her books are on my automatic “must-read-now” category. That being said, this second book in her Code of Honor series was a much anticipated read, one I've waited a long time to get my hands on! She never disappoints and once I had this in hand, I settled in for the long haul. So reader be warned, you don't want to put this down once you start!


If you've ever watched “The Monuments Men”, you'll enjoy the nod towards the movie and their quest to preserve priceless art masterpieces from under the nose of the Nazis. In the books case, artifacts are being stolen and used for a much more sinister plot! Think ISIS, now isn't that beyond scary? Kristin Dane is an innocent pawn in a terrorists scheme. Luke Carter along with his team must protect her as they try to catch the illusive men behind the plot. I had high blood pressure as I watched things unfolding and dizzy with all the twists and turns Hannon takes her readers on. The breath-stealing ending had my heart in my throat; what a way to wrap up another hair-raising suspense by one of the best authors out there. Whew, I still feel a bit discombobulated from the roller coaster of a ride! It may take a while to get my landlubbers feet under me; that tells me Hannon did her job as a writer.

Talking about breath-stealing, the romance brewing between Kristin and Luke sizzles under the surface. You can physically feel the electricity between these two. Though for Luke, he's the perfect gentleman playing it cool since much more is at stake than his heart. I think it was a great balance of suspense and romance, another thing I love about Hannon's writing. She consistently delivers on all elements without overriding any of them. Lastly, character growth and spiritual theme are evident throughout. Both Kristin and Luke have family issues in their past they must overcome, and forgiveness plays a huge part in all of it. To sum it up: with gripping suspense, stirring inspirational moments, a frantic race to squash a sinister plot, and affairs of the heart, Hannon once again delivers. Don't miss this exciting addition to a fantastic series!

*I received a complimentary copy from Revell and Netgalley and was under no obligation to leave a positive review. All opinions expressed are my own. *

As teenagers, Kristin Dane and her two best friends took a vow to make the world a better place. Twenty years later, she's fulfilling that pledge through her fair trade shop that features products from around the world. All is well until, one by one, people connected to the shop begin dying.

Detective Luke Carter, new to the St. Louis PD, wants to know why. Before he can answer that question, however, the FBI weighs in and Kristin suddenly finds herself in the middle of international intrigue--and in the sights of the ruthless mastermind behind an ingenious and deadly, scheme. Can this cold-blooded killer be stopped before more people die . . . including Kristin?

Three-time RITA Award-winner and "queen of inspirational romantic suspense" (Library Journal) Irene Hannon doesn't disappoint in this edge-of-your-seat thriller that will have readers up late as they rush toward the explosive conclusion.