THE SOUND OF DISTANT THUNDER by Jan Drexler, Reviewed by Trixi Oberembt

What I liked: The characters! Jan Drexler created characters that become real people with real lives in my mind. I found myself caring about the community of Weaver's Creek. I've read many Amish books over the years and admire their lifestyle and principles; their sense of community is strong and family ties are tight. What one family may go through, the whole community does and you can see this in the story. 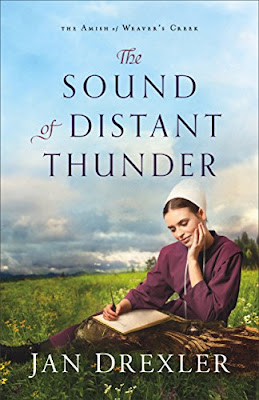 When the threat of the Civil War comes knocking on their back door, they must decide what the right thing to do is. Being Old Order Amish, fighting goes against their very beliefs and way of separating themselves from the world. I watched this play out in each of the characters; how they felt, thought and acted. Secondly, I loved watching the love story unfold between Jonas Weaver and Katie Stuckey. Already committed to each other and ready to marry once they join the church. I also saw Jonas struggle with both wanting to stay true to his roots and wanting to fight in the war to free slaves. Sometimes wanting to do the right thing or making the right choice never comes easy. Katie is ready to settle down and be a wife and someday a mother. She has a bright future in front of her but with Jonas's increasing talk of wanting to join the army, she struggles too. There's just a whole lot of other elements to keep the reader interested!

What I didn't like: For me, the story started slow. The characters were introduced at a rapid fire pace and I had a hard time (at first) keeping them straight. But press on I did because I've read many great reviews on Drexler's writing, and I'm glad I stuck it out! Lastly, I really dislike how this ended. There was not a satisfying enough conclusion for me. It brought up more questions than answers and had too many loose strings for my taste. Yes, it leads me to want to read the next book, of course! It's just frustrating to me as a reader to get to the end of a great story and be left hanging on some important elements.

In conclusion: It's a great story on how a person struggles with his or her own principles, beliefs and how these shape their lives. It's also about how, even in those struggles and uncertainties, we need to leave things in God's hand and trust Him to work things out in His own timing and way. A lesson each of the characters learn and great reminders to apply to our own lives. In spite of the things I didn't like, I will be reading the rest of this series. Jan deeply involved me in her characters lives and there are questions yet to be answered!

*I received a complimentary copy from Revell and Netgalley and was under no obligation to leave a positive review. All opinions are my own. *

Back Cover Blurb:
Katie Stuckey and Jonas Weaver are both romantics. Seventeen-year-old Katie is starry-eyed, in love with the idea of being in love, and does not want to wait to marry Jonas until she is eighteen, despite her parents' insistence. So much can happen in a year. Twenty-year-old Jonas is taken in by the romance of soldiering, especially in defense of anti-slavery, even though he knows war is at odds with the teachings of the church. When his married brother's name comes up in the draft list, he volunteers to take his brother's place. But can the commitment Katie and Jonas have made to each other survive the separation?

From the talented pen of Jan Drexler comes this brand new Amish series set against the backdrop of the Civil War. She puts her characters to the test as they struggle to reconcile their convictions and desires while the national conflict threatens to undermine and engulf their community.