"Apparently the lad hadn't the gift of gab."

No, he didn't. In fact Thor Norgaard's vocabulary was severely limited to signs formed using the fingers of his massive hands, but that in no way meant that he could not effectively communicate with a turn of his head or an expression in his eyes. Meeting Aven Norgaard walking up his mountain lane, seemed almost like an apparition, after having considered the photo of his dead cousin's wife for so long. But what could he possibly offer her that his passionate, impulsive, younger brother couldn't offer her sooner? More importantly, Thor had demons to quell. 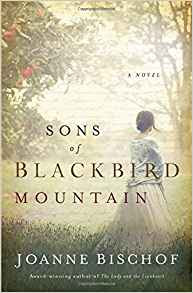 Aven Norgaard arrives at Blackbird Mountain on foot, admiring its vast, lovely acres of orchards and sensing more plentiful abundance than she could have ever imagined. However, she was quite shocked to learn that Aunt Dorothe's three "boys" were actually grown men who made quite a profitable income off the hard cider they brewed on the family's farm. Sadly, she was also informed of Dorothe's recent passing. What to do now; stay on the mountain or seek employment elsewhere? One, and only one, of the handsome brothers can solidify that decision.

"She'd always heard him because she knew how to listen." A more symphonic romance has barely been penned, as readers hear Aven and Thor bare their souls without saying a word.

*I purchased this novel and was under no obligation to review it.


A Tale of Family, Brotherhood, and the Healing Power of Love
After the tragic death of her husband, Aven Norgaard is beckoned to give up her life in Norway to become a housekeeper in the rugged hills of nineteenth-century Appalachia. Upon arrival, she finds herself in the home of her late husband’s cousins—three brothers who make a living by brewing hard cider on their three-hundred-acre farm. Yet even as a stranger in a foreign land, Aven has hope to build a new life in this tight-knit family.

But her unassuming beauty disrupts the bond between the brothers. The youngest two both desire her hand, and Aven is caught in the middle, unsure where—and whether—to offer her affection. While Haakon is bold and passionate, it is Thor who casts the greatest spell upon her. Though Deaf, mute, and dependent on hard drink to cope with his silent pain, Thor possesses a sobering strength.

As autumn ushers in the apple harvest, the rift between Thor and Haakon deepens and Aven faces a choice that risks hearts. Will two brothers’ longing for her quiet spirit tear apart a family? Can she find a tender belonging in this remote, rugged, and unfamiliar world?

A haunting tale of struggle and redemption, Sons of Blackbird Mountain is a portrait of grace in a world where the broken may find new life through the healing mercy of love.