If you enjoy reading light, humor infused romance with subtle, stirring life messages, this collection of delightful novellas is exactly what the "doctor of love" would order! 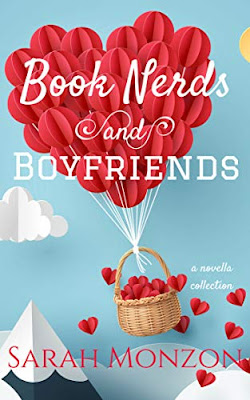 "You read all these great stories about heroes and heroines who do all sorts of things while you're safely tucked inside your apartment. You live vicariously through them, but that's not living, Em."

Ahem . . . . . . maybe Tate is on to something, Emory Blake does delve into the pages of a book whenever and wherever time allows. So why all of a sudden is her best friend Tate Woodby calling her out, daring her to put her pages down and begin a series of real-adventures with him?
"Bookishly Ever After"

When Ashleigh Darmody's little sister pleads with her to make a good impression on Claire's hope-to-be high profile religious figure in-laws, the son of a good friend comes to her rescue. Landon Novak seems to have a vague agenda of his own, but he also seems like a really nice man . . . for a fake husband.

Can Ashleigh and Landon pull off a charade that has potential disaster written all over it, or can Ashleigh "pick up her pen and write (her) own happily ever after"?
"Literarily For Keeps"

"You can't write what you don't know, so go become an expert on love."

What? . . . . Novelist Harper Jones thinks of herself as impeccable when it comes to her research, but her editor has just given her an absurd assignment. If she wants to land another three book contract, her romance needs more zip . . . . . like she actually knows what she's writing about.

Ironically, that last person she would ever want to kiss has re-entered her life at the worse possible time. Police officer Kyo Tanaka has just arrested her for driving around town with a body in her trunk . . . of course it was just a friend doing her own novel-ish research, but who's listening to that story? Placed on parole, with none other than Mr. zip-tie himself as her overseeing officer, Harper is about to learn that there's more story than she ever realized in a "happily-ever-after".
"Novelly Upon a Time"

A light, fun, inspiring collection of romantic novellas with creative twists and turns!


A collection of three bookish novellas
Bookishly Ever After

It all started with a bet and a book.Emory Blake is the ultimate bibliophile. She’d take curling up with a good novel over a night on the town any day of the week. But then best friend Tate Woodby accuses her of living between the pages of her paperbacks instead of the real world, and makes a bet that will force her to experience the adventures of her fictional friends…instead of just reading about them. With her face no longer buried in books, Emory must confront the pain of the past. But is it also her perfect opportunity to discover the hunky hero who could be the happily-ever-after of her own story?

She only has to pretend to be married for five days. What's the worst that could happen? Literature professor Ashleigh Darmody never imagined her life would turn into a classic trope, but that's exactly what happens when her sister Claire calls with a bizarre request--quickly find a fake husband. Backstory is a powerful thing, and Ashleigh's has plenty of shadows, but is her past so shady that it requires an elaborate scheme to ensure Claire's prospective father-in-law, renowned TV evangelist Ken Abrams, will give her his blessing to marry his son?Already divorced from a man who turned out to be other than he claimed, Ashleigh now has to pretend to be blissfully married to a stranger for the next five days. But when the lines of fiction and reality blur with each tick of the clock, could a temporary deal turn into something for keeps?

Novelly Upon A Time

Harper Jones prides herself on the impeccable research she does for her novels, so when early reviews come pouring in claiming her romance reeks of inauthenticity, her editor suggests pulling her nose out of books and getting some real-life smooching experience. But her plans to do just that are thwarted by her arch nemesis from high school who's recently returned to town. Suddenly she's left with an impossible decision--kiss her worst enemy or kiss her three-book contract goodbye.

Available in digital ebook or paperback:
Purchase Book Nerds and Boyfriends at Amazon