THE LINE BETWEEN by Tosca Lee, Reviewed by Susan Snodgrass

'One step. That's all it takes to span the distance of eternity. Welcome to hell.'
Tosca Lee carries her readers on a scary, riveting ride that grips the mind and refuses to let go. 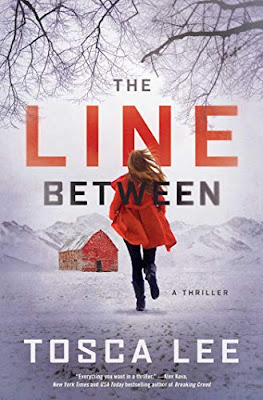 Wynter Roth has just been cast out of a religious cult/commune and seeks shelter with a friend of her mother's. The outside world is completely new and bewildering and her mind is on overload. At the same time, an extinct disease re-emerges from the permafrost in Alaska and whole cities are being quarantined. Then the grid in the country and other parts of the world goes crazy. Interstates are blocked, people are running for their lives, scared to death of this illness that begins as flu-like, then causes rapid onset early dementia. No vaccine, either.
Wynter's sister shows up, from the same cult, and gives her a set of specimens that she has stolen from the cult leader. Specimens that just may hold the answer to this disease. IF Wynter can get them to a scientist in Colorado. Wynter seeks a rider with a former marine, Chase Miller, after her car is damaged and together they seek to remedy this world that has been thrown into total chaos.
I was completely riveted during this entire book. Lee has done a bang up job with this one and I highly recommend it. I was on the edge of my seat throughout the book.
*My thanks to the publisher for an early copy of this book via Net Galley. The opinions expressed above are entirely my own.

BackCover Blurb:
In this frighteningly believable thriller from New York Times bestselling author Tosca Lee, an extinct disease re-emerges from the melting Alaskan permafrost to cause madness in its victims. For recent apocalyptic cult escapee Wynter Roth, it’s the end she’d always been told was coming.

When Wynter Roth is turned out of New Earth, a self-contained doomsday cult on the American prairie, she emerges into a world poised on the brink of madness as a mysterious outbreak of rapid early onset dementia spreads across the nation.
As Wynter struggles to start over in a world she’s been taught to regard as evil, she finds herself face-to-face with the apocalypse she’s feared all her life—until the night her sister shows up at her doorstep with a set of medical samples. That night, Wynter learns there’s something far more sinister at play and that these samples are key to understanding the disease.
Now, as the power grid fails and the nation descends into chaos, Wynter must find a way to get the samples to a lab in Colorado. Uncertain who to trust, she takes up with former military man Chase Miller, who has his own reasons for wanting to get close to the samples in her possession, and to Wynter herself.
Filled with action, conspiracy, romance, and questions of whom—and what—to believe, The Line Between is a high-octane story of survival and love in a world on the brink of madness.