A DESPERATE HOPE by Elizabeth Camden, Reviewed by Rebecca Maney

"Hope is a powerful motivator, and love brings out the best in those who recognize its unique ability to override desperation."

"Sometimes there are more important things in life than timetables or profit margins, and those things are called dreams." 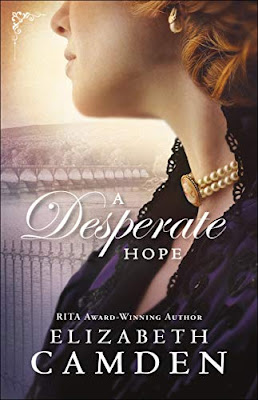 According to Eloise Drake's recollection, Alex Duval had been nothing more than a teen-age dreamer, whose "pie-in-the-sky" perspective on life had driven her overprotective guardian to banish her broken heart to a remote convent in Arizona.

That was then. This was now. The grown up version of Alex, currently the mayor of Duval Springs, still has the power to sway her opinion with just the hint of a smile, but Eloise has arrived as an accountant for the state of New York; and the job that she has been assigned to do has nothing in common with juvenile dreams and everything to do with calculating the worth of town structures on the brink of destruction. Everything in the idyllic mountain town is scheduled to be demolished in order to make room for the state's new water reservoir.

Until . . . Alex begins to dream again. Is it true? "It is in tackling the new and the scary that we become who we are meant to be." Hope is a powerful motivator, and love brings out the best in those who recognize its unique ability to override desperation.

Enjoy this conclusion to the author's wildly popular "An Empire State" series.

Eloise Drake's prim demeanor hides the turbulent past she's finally put behind her--or so she thinks. A mathematical genius, she's now a successful accountant for the largest engineering project in 1908 New York. But to her dismay, her new position puts her back in the path of the man responsible for her deepest heartbreak.

Alex Duval is the mayor of a town about to be wiped off the map. The state plans to flood the entire valley where his town sits in order to build a new reservoir, and Alex is stunned to discover the woman he once loved on the team charged with the demolition. With his world crumbling around him, Alex devises a risky plan to save his town--but he needs Eloise's help to succeed.

Alex is determined to win back the woman he thought he'd lost forever, but even their combined ingenuity may not be enough to overcome the odds against them before it's too late.