In true Susan Sleeman fashion, Cold Pursuit (Cold Harbor series, book 6) grabbed my interest from the first page and kept me reading and guessing to the end. The twists and turns were as plentiful as the ones on the ski slopes of the story setting. Sleeman’s careful research, gripping plot, and vividly drawn characters made this an outstanding addition to her series about the Blackwell Tactical team. Although Alex Hamilton and Whitney Rochester were the main characters of this book, it was such fun to see the other members of the team show up as secondary characters. 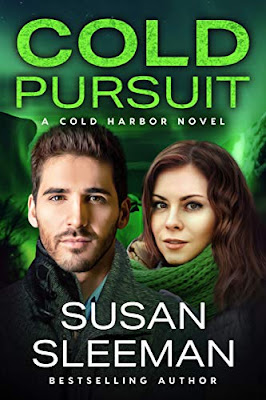 Packed with adventure, intrigue, heart-pounding suspense, and romance—with some inspiration thrown in for good measure—this book has it all! I would recommend it to those who enjoy clean romantic suspense. It’s a great addition to the series. I’m definitely looking forward to the next Cold Harbor book. 4 ½ stars

*I voluntarily reviewed a complimentary copy from the author/publisher. All opinions are my own.

BackCover Blurb:
She’s on the run…

When Whitney Rochester’s brother-in-law kills her sister, Whitney fears for the life of her niece and nephew. She can’t leave them in her murderous brother-in-law’s care so she goes on the run with the children to be sure they’re out of his reach. Or so she thinks until a killer shows up—weapon in hand—at the ski resort where she works and targets her.

But he’s in pursuit.

Former Recon Marine Alex Hamilton is working an undercover investigation at the resort when a crazed man wielding a gun takes out a guy in close proximity to Whitney. Despite not having the support of the Blackwell Tactical team, other than their forensic expert, Samantha Willis, Alex isn’t about to let the shooter harm Whitney or anyone else. When a blinding snowstorm triggers avalanches in the area, it’s too dangerous for the police to reach the secluded resort to stop the killer. Alex and Sam must protect everyone at the resort while they feverishly work to figure out if Whitney or the victim were the intended target. As Alex and Whitney grow close and the killer strikes again, Alex has to find and take down this madman, even if it means risking his own life.