This third novel in Coble's 'Lavender Tides' series is so good!
She picks up on a thread in the first two books and continues it here. Bailey Fleming finds herself running for her life after very suspicious circumstances descend on her life. Her mother has lied about her identity and her husband was definitely not who she thought he was. Bailey is afraid to trust anyone. She goes to a cabin whose deed she's been given, not knowing a thing about the area. Bodies are discovered there soon afterwards and the cabin has been used in a dangerous human trafficking ring. 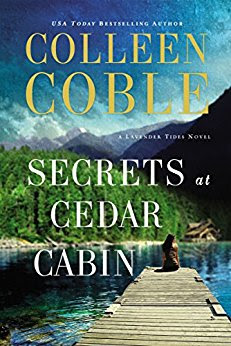 FBI agent Lance Phoenix is investigating the crimes and soon decides to protect Bailey from whoever is trying to kill her. He is also determined to rescue his sister who has been abducted after running away from home as a teen. He suspects she has been lured into the human trafficking ring.

Coble hits the ground running here, with enough mystery and suspense to satisfy every reader. I was completely captivated from the beginning. I love Coble's Rock Harbor series and this one starts out there, but quickly moves to Lavender Tides. In my opinion, this is some of Colleen Coble's very best work! I enjoyed every single bit of this one. Highly recommended.

*I received a complimentary copy of this book from Thomas Nelson Publishers through Net Galley. Opinions expressed in this review are completely my own.

BackCover Blurb:
Her mother lied about her identity and her husband wasn’t who she thought he was—can Bailey even trust herself anymore?
Running for her life in the wake of her mother’s murder, Bailey Fleming escapes to the only place she can think of—a remote, dilapidated cabin in Lavender Tides. Intending to finally get to the truth behind the lies of her past, Bailey only finds more questions when bodies are discovered near her cabin hideout along with traces of a dangerous human trafficking ring. In an unlikely partnership with FBI agent Lance Phoenix, Bailey races to understand the mystery surrounding her life and circumstances before the murderer tracks her down.
Meanwhile, Lance is determined to rescue his sister, Ava, who was abducted after running away from home as a teenager. An unexpected lead brings him to the remote cabin, and he wonders if Bailey—with her suspicious past and strange connections to his sister’s case—is really who she claims to be and if she can somehow lead him to Ava.
Filled with Colleen Coble's custom blend of suspense and romance, Secrets at Cedar Cabin takes us back to the evocative landscape of Washington's coast where nothing is quite as it seems.