Love’s Rescue by Linda Shenton Matchett is a novella that packs a punch.
This re-telling of the Rahab and the spies story told against a backdrop of occupied Paris during August 1944 is very realistic and captures the favor of the time. 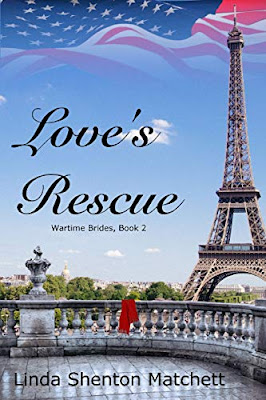 Rolande is accused of being a collaborator with the Nazis but she does what she has to out of desperation and is ostracized by her family and friends. She meets two American soldiers and hides them from the Germans. She elicits a promise to keep her family safe during the liberation.

This is a story of Redemption, forgiveness and reconciliation with a clear Gospel message. It fits nicely with the Rahab story in the Old Testament and gives the reader a glimpse into WWII history.

A prostitute, a spy, and the liberation of Paris.

Sold by her parents to settle a debt, Rolande Bisset is forced into prostitution. Years later, shunned by her family and most of society, it’s the only way she knows how to subsist. When the Germans overrun Paris, she decides she’s had enough of evil men controlling her life and uses her wiles to obtain information for the Allied forces. Branded a collaborator, her life hangs in the balance. Then an American spy stumbles onto her doorstep. Is redemption within her grasp?

Simon Harlow is one of an elite corps of American soldiers. Regularly chosen for dangerous covert missions, he is tasked with infiltrating Paris to ascertain the Axis’s defenses. Nearly caught by German forces moments after arriving, he owes his life to the beautiful prostitute who claims she’s been waiting for the Allies to arrive. Her lifestyle goes against everything he believes in, but will she steal his heart during his quest to liberate her city?

Inspired by the biblical story of Rahab, Love’s Rescue is a tale of faith and hope during one of history’s darkest periods.