KEEPER OF THE STARS by Robin Lee Hatcher, Reviewed by Karen Klepsteen

Penny Cartwright is reeling from the accidental death of her younger brother Brad. Having already faced the loss of her mother in her youth, she is overwhelmed with grief and anger at this additional heartache. The last person that she wants to see is country singer Trevor Reynolds, the man that she holds responsible for Brad’s death. 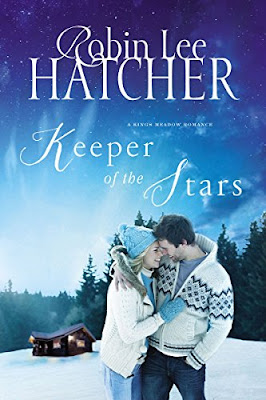 Having made a promise to Brad, Trevor travels to Kings Meadow to keep his word, not knowing exactly how long he’s going to stay or what he’ll do while he’s there. As he settles into life in small town Idaho, he’s welcomed by everyone in the community...except for Penny. As her father grows closer to Trevor and gets to know the man who was such a good friend to his son, Penny’s heart slowly starts to soften. Over the course of the book, both she and Trevor receive a new heart, so to speak, as they learn to forgive themselves for their past mistakes and move forward through their grief. Penny and Trevor both learn to give control of their lives to God, but in different ways and for different reasons.

As the Reynolds and Cartwright families grow closer together throughout the story, we get to see all of the love and healing take place, and this is my favorite book in the Kings Meadow series. I feel like it has the strongest message of forgiveness, faith, and spiritual renewal, and I highly recommend reading it, especially in the winter as that is when it takes place.


*I won a copy of Keeper of the Stars from GoodReads and am under no obligation to provide a positive review. All opinions are my own.

Forgiveness is the only cure for heartbreak. But can Penny forgive the man she holds responsible for her brother’s death?
When her mother died from pneumonia, Penny Cartwright was heartbroken. But now, after burying her younger brother just 12 years later, she is devastated. Anger, guilt, and sorrow cloud Penny’s mind, and the last thing she wants is to be reminded of her pain—but that’s exactly what happens when a stranger comes to town.
Trevor Reynolds has been chasing fame for more than a dozen years, but his musical career can’t get off the ground. While on the road, an accident kills his young drummer, Brad Cartwright. Trevor wasn’t behind the wheel, but he still blames himself . . . and so does Brad’s sister, Penny. Now Trevor finds himself in Kings Meadow, determined to follow through on his final promise to his friend.
Still feeling the pain of Brad’s death, Penny and Trevor must learn that forgiveness is the only thing that can heal their hearts. And if they do forgive, something beautiful may rise from the ashes of heartbreak.